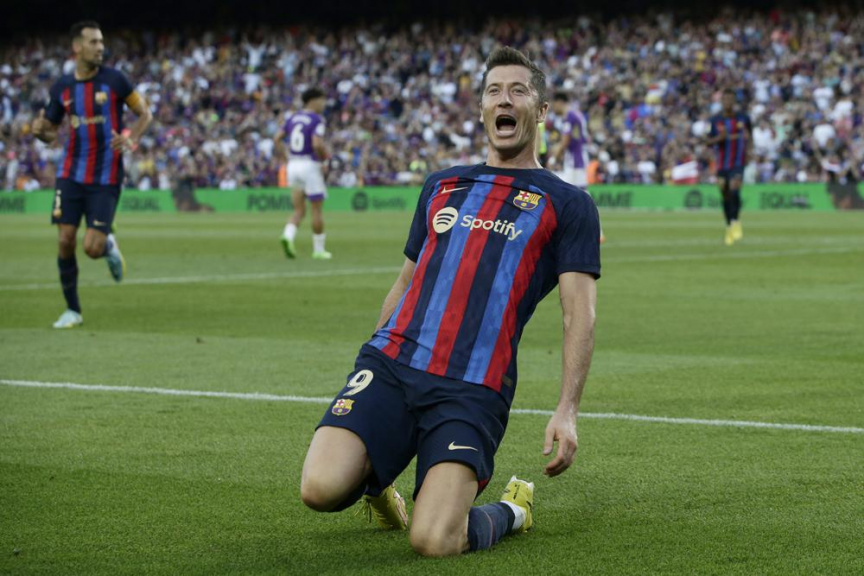 MADRID (AP) — With a defender moving in front of him and blocking his view inside the area, Robert Lewandowski stayed calm.

The veteran striker patiently waited for a gap, then quickly used his backheel to gently send the ball into the far corner for a beautiful goal.

Lewandowski continues to make scoring look easy after joining Barcelona from Bayern Munich. Barcelona’s top signing this season found the net twice on Sunday to lead the Catalan club to a 4-0 rout of Valladolid in the Spanish league.

Real Madrid relied on Karim Benzema, its trustworthy striker for years, to maintain a perfect start with its third straight away victory. Benzema scored in the 88th minute and deep into stoppage time to give the defending champion a 3-1 win at Espanyol.

It was the third league goal for Benzema, while Lewandowski took his tally to four. The Poland striker had also scored a double in the 4-1 victory at Real Sociedad last weekend. He was also twice denied by the woodwork at the Camp Nou on Sunday.

“He is extraordinary,” Barcelona coach Xavi Hernández said of Lewandowski. “He is a natural leader who has been helping us greatly.”

Pedri González and Sergi Roberto also scored for Barcelona, which had opened with a disappointing 0-0 draw against Rayo Vallecano at home.

The 34-year-old Lewandowski, signed from Bayern for nearly $50 million, got on the board in the 24th by completing a nice pass by Raphinha, another one of Barcelona new signings who has been playing well.

Pedri added to the lead in the 43rd from near the penalty spot after an assist by Ousmane Dembélé, who also set up Lewandowski’s superb backheel goal in the 64th. Roberto closed the scoring in stoppage time.

“We knew what kind of player we had signed,” newly signed Barcelona defender Jules Koundé said of Lewandowski. “He is a top striker and he shows it with his goals and with how he helps the team.”

Barcelona finally could count on Koundé, who had not been registered ahead of the first two rounds because the club wasn’t able to abide with the league’s fair play regulations. The former Sevilla defender started in the right back position and impressed in his debut.

Valladolid, owned by former Brazil and Barcelona great Ronaldo, is back in the first division after a one-year absence. It was coming off a home loss against Villarreal and a draw at Sevilla.

Madrid was a few minutes away from losing its perfect record when Benzema came through with two late goals against Espanyol.

Madrid was far from its best but Benzema helped to salvage the win with a nice close-range touch to complete a well-placed cross by Rodrygo. Benzema than easily converted a free kick after Espanyol defender Leandro Cabrera had to play in goal because goalkeeper Benjamin Lecomte was sent off and all substitutions had been made.

Vinícius Júnior had put Madrid ahead in the 12th and Joselu equalized for the hosts in the 43rd.

It was the third match in a row on the road for Madrid, which asked to start away from home because of renovation work at its Santiago Bernabéu Stadium. The team will be back at the venue for its match against Real Betis on Saturday.

Madrid beat Almería and Celta Vigo in its first two games. Espanyol stayed winless after having drawn at Celta before losing to Rayo Vallecano at home.

Villarreal ended its perfect record with a 0-0 draw at Getafe, which was yet to win a point this season.

Unai Emery’s Villarreal had most of the scoring chances. A penalty kick in its favor deep into stoppage time was reversed after video review.

Getafe had conceded three goals in each of its first two matches.

Cádiz was the only other team without a point entering the weekend. It will have a chance to end its losing streak when it hosts unbeaten Athletic Bilbao on Monday.

Police had to intervene after a confrontation between fans of second division clubs Racing Santander and Oviedo on Sunday.

Authorities said the fans threw rocks and other objects at each other.

There were no reports of injuries or arrests.

Oviedo won the match 1-0 in Santander.

Madrid held by Girona in Spanish league in new setback