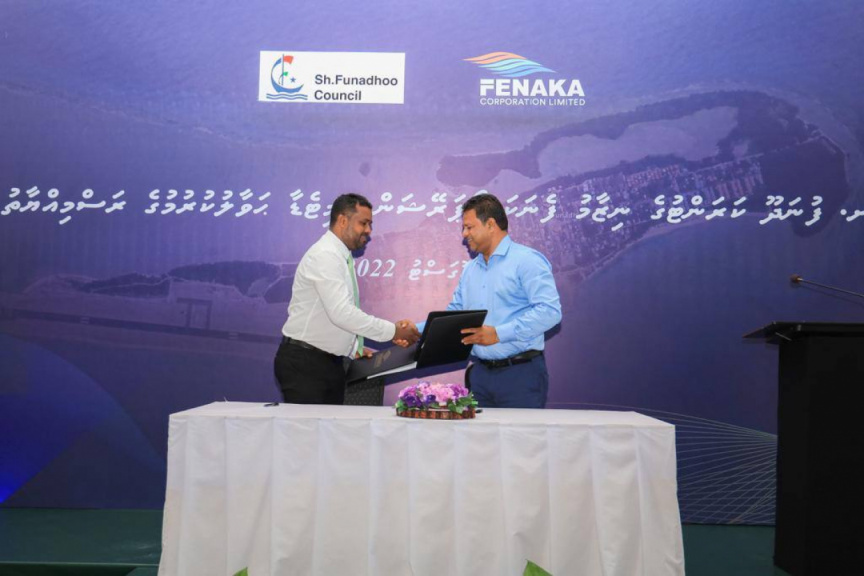 Ceremony held for the handover of Funadhoo Powerhouse to Fenaka Corporation on August 24, 2022. (Photo/Fenaka)

The powerhouse in Sh. Funadhoo – which was run by the residents of the island for 36 years – has been handed over to the management of Fenaka Corporation.

Speaking at the ceremony, Shauna said that electricity was previously provided in islands based on individual means, and that the powerhouses weren’t the most environment friendly.

“That was because of our circumstances at the time, because it was hard to get people with sufficient training to run and manage this system. This has resulted in wastage of energy and dangerous incidents,” she said.

Shauna said the government was therefore working on improving the quality of essential services, and making the services affordable and safe.

Maldives depends on fuel imported from foreign countries for the generation of electricity. Shauna said that with major changes to the global fuel market, Maldives was now overspending on fuel.

“The funds for important areas such as education, health and development are being spent heavily on importing fuel to Maldives,” she said.

Shauna said Maldives needs to increase the generation of solar power in order to reduce the spending.

She said that solar systems had therefore been increased at a remarkable level in islands across Maldives over the last three years.

Speaking at the ceremony, Fenaka’s MD Saeed said the company provided services to all islands with sincerity.

Saeed said there were many issues that needed to be remedied at the Funadhoo Powerhouse.

He said that would be the company’s first task.

“The second task is to build a good network in the island. While all this is happening, we will make temporary arrangements to ensure the residents of this island enjoy uninterrupted service. We want you to be sincere and to have faith in us,” he said.

Saeed said that the transfer of the powerhouse to the management of Fenaka will create new employment opportunities. He said the opportunities were open to all residents.

“The opportunity is open for people of all walks of life to contact us. Because we directly service the people, our policy is to employ zero discrimination,” he said.

Fenaka has brought in new 600 kilowatt and 800 kilowatt generators to provide electricity to Funadhoo.