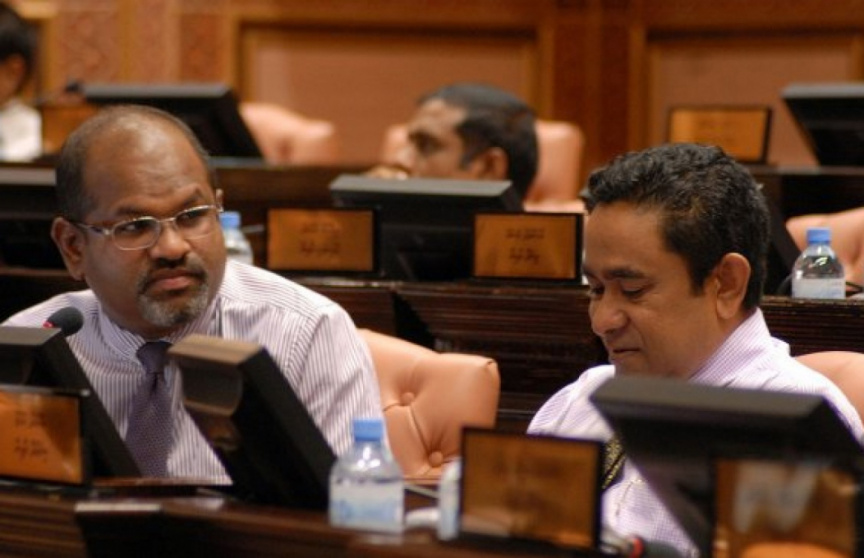 Then-close acquittance of former President Abdulla Yameen Abdul Gayyoom, former Deputy Speaker of the Parliament Ahmed Nazim has stated that the biggest corruption case to surface in recent Maldivian history, the MMPRC scandal, was initiated in order for Yameen to pay back money he had borrowed from different people for 2013’s presidential elections.

Nazim made the remark whilst testifying as a witness for the prosecution at a hearing held in Criminal Court on Tuesday in the money laundering and bribery case against Yameen in connection to the sale of V. Aarah for resort development.

Responding to questions posed by the prosecution to Nazim at today’s hearing – he explained how he came to meet Yameen and how their relations concluded. Nazim also said that evidence of corruption cases that surfaced whilst he was working close with Yameen was brought to then-president’s attention.

In this regard, Nazim detailed how a ‘scam’ was initiated to pay back Yameen’s debts. He said that money was borrowed from prominent businesspersons for 2013’s presential elections.

He added that former Vice President Ahmed Adheeb was in charge of securing the money and bringing into Yameen’s residence, Ma. Dhoovehi.

“Adheeb brought something in a back bag. He said it was MVR 15 million,”

“Normally, money was borrowed through cheques. Was taking cheques on condition of paying back the money. That money was also acquired through a cheque,” he had said.

Nazim alleged that Yameen had extorted people’s money from the government to pay back the money he had borrowed from businesspersons. He said that he had gone to confront Yameen with documents he had received as evidence of corruption.

“The information I had received was USD 5 million being borrowed from MPL (Maldives Ports Limited) on condition of paying it back,” he detailed.

Underscoring there was no wrong in borrowing money on condition of paying it back – Nazim said that the issue arose when the money was deposited to suspicious accounts. He said the accounts included the account of a businessperson he had borrowed money from for the presidential election.

He explained at court what he had comprehended from this act.

Nazim said that he confronted Yameen on the matter as he personally believed it was unjust use the people’s money to pay back the presidential election debt.

On the day of the confrontation – Nazim said that Yameen had told Adheeb is sent to get the money, whereas he had denied receiving the money borrowed from MPL.

Yameen had not spoken at all in today’s hearing.

Both Yameen and Nazim were long-time close friends. They had worked for the government side-by-side and also formed a political party together. Their relationship strained during Yameen’s presidency. Nazim was sentenced to 25-years, affirmed by the Supreme Court, during Yameen’s administration. This ruling was nullified after the current administration came into power.