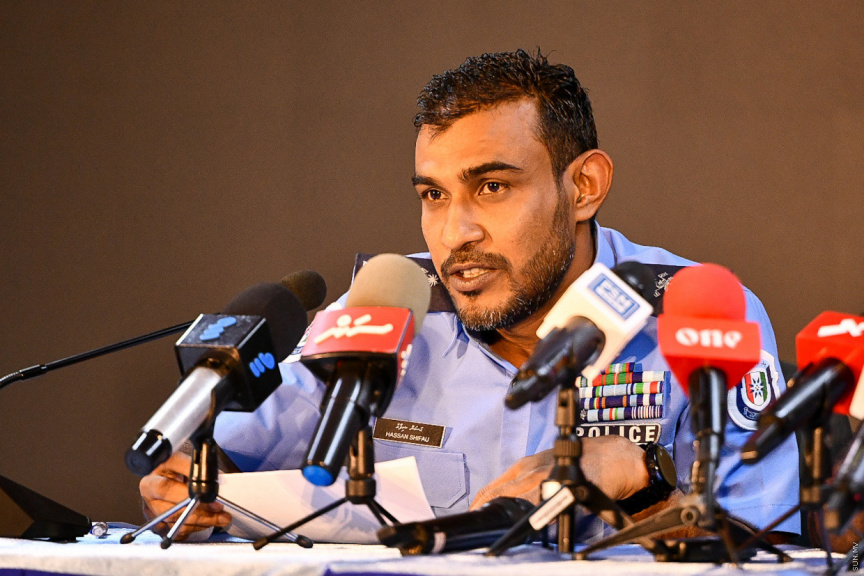 Maldives Police Service on Sunday revealed that Ali Shaahil, 22, Finfenmaage, F. Nilandhoo who was arrested in connection to the brutal murder of Shiaau Mohamed Saeed, Kuri, Fuvahmulah City on early Sunday morning was under the influence at the time of the arrest.

Shaahil was arrested at the crime scene and was led into the Police vehicle in a hazmat suit.

The Police held a press conference Sunday evening to address the brutal murder of Shiaau.

While the authority was unable to confirm the type of substance he had used, they did note that currently they only have temporary results for the drug tests.

Speaking to the press, the authority’s Serious and Organized Crime Department Head, Chief Superintendent of Police Hassan Shifaau said that at the moment they were unable to share the details pertaining to the nature of the victim’s injuries. He added that this was in line with the victim's family’s wishes as well.

However, he did confirm that Police was able to collect the weapon/weapons used to commit the crime from the scene.

When questioned about whose apartment H. Sheereenvilla was, Police said that right now they can only confirm that the accused lived there.

The crime took place on the ninth floor of the building, which is located at Burevi Magu where Cibo Café is situated.

Police also confirmed that so far, Shaahil was the only suspect in the murder.

“So far Shaahil is our only suspect in Shiaau’s murder,” said Superintendent of Police Shifaau.

He went on to note that it was difficult to share the motive behind the attack right now.

Additionally, Police dismissed the reports on media that claimed the victim and accused were a married couple.

A friend of the victim who spoke to Sun on the condition of anonymity said that Shaahil has a previous record of domestic violence.

“In Shaahil’s previous relationships, he has exercised violence. He is a very high-tempered person,” the source detailed.

The Criminal Court sentenced Shaahil to be held in custody until the end of the trial. The hearing was held behind closed doors at the request of Police.

The victim, Shiaau’s body was transported to Gololhu Mortuary in an ambulance belonging to Indira Gandhi Memorial Hospital (IGMH) last night from the crime scene. Sun journalists who were at the scene reported that her body was loaded onto the ambulance in two separate body bags.

Sun has learned Shiaau sustained deep wounds in the attack – with parts of her body being mutilated and dismembered.

The victim’s family in a statement posted on social media thanked everyone for their concerns and asked to pray for the deceased. They also requested media and the public refrain from posting pictures of her or the details pertaining to her injuries.