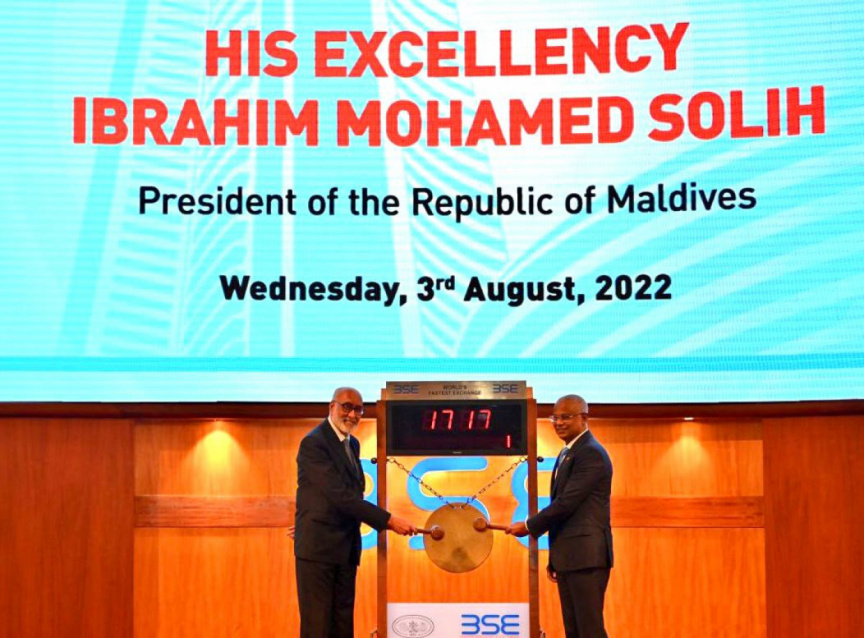 The President and the Maldivian delegation of senior government officials and business leaders were welcomed by BSE’s Chairman Shri S.S. Mumdra upon their arrival.

The President and the Maldivian delegation held discussions with the board members and other management staff of the BSE about investment and capital market development opportunities. A particular interest in finding avenues to collaborate on developing Maldives’ stock markets was discussed.

After concluding the discussions – President Solih accompanied by Chairman Mundra toured the BSE Network Operation Centre and the Security Operation Centre, and participated in a symbolic bell ringing ceremony.

Stock exchanges around the world use bell ringing to signal opening and closing of the day’s stock trading.

President Solih arrived Mumbai on Wednesday morning. Following his arrival – he met with the Governor of Maharashtra Shri Bhaghat Singh Koshyari. During this meeting, both parties discussed an array of topics of mutual interest and discussed prospects for collaboration.

The Governor also hosted a special lunch in honor of President Solih and his delegation.

This official visit is being undertaken by the President at the invitation of India’s Prime Minister Narendra Modi.

At New Delhi, President Solih and PM Modi virtually initiated and viewed the pouring of first concrete of the Greater Male’ Connectivity Project, and witnessed the signing of six MoUs at a special ceremony.

In a joint statement delivered by both leaders following the ceremony – they both reiterated the commitment to further strengthen the longstanding relations between the two nations.

He also attended the India-Maldives Forum held in New Delhi where he delivered the keynote speech.

The President is set to conclude his four-day visit to India today, and return to the Maldives.

Six arrested over protests in Kudahuvadhoo