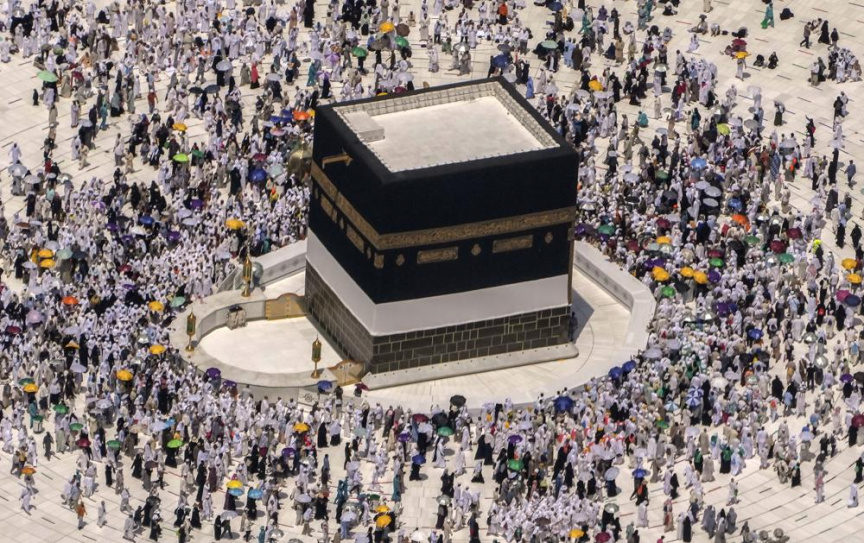 Muslim pilgrims walk around the Kaaba, the cubic building at the Grand Mosque, during the annual hajj pilgrimage, in Mecca, Saudi Arabia, on July 10, 2022. (AP Photo/Amr Nabil, File)

RIYADH, Saudi Arabia (AP) — Police in Mecca say they have arrested a Saudi man who helped an Israeli-Jewish reporter sneak into Islam’s holiest city, defying a rule that only Muslims can enter the area.

While Muslims of any nationality and background can enter Mecca, non-Muslims are not permitted because a very specific code of conduct and behavior is required of all people within its boundaries, including certain forms of modesty, ritual cleansing and prayers.

The public backlash over television reporter Gil Tamary’s visit was immediate on social media, with Muslims and Saudis expressing their anger over his deception and apparent disregard for the sanctity of the site.

It comes as Saudi-Israeli ties have been quietly growing amid shared concerns over arch-enemy Iran. This incident is unlikely to dampen the relationship. Publicly, the kingdom insists its policy is that full ties can only happen when Palestinian statehood and rights are guaranteed.

The outcry appears to have prompted Saudi police late Friday to announce the arrest of the Saudi man who they say facilitated the entry of the journalist into Mecca in explicit violation of regulations prohibiting the entry of non-Muslims. The Saudi male national, whose identity was not revealed, was referred to prosecution and remains under arrest.

The veteran reporter for Channel 13 in Israel filmed himself in Mecca for a roughly 10-minute-long segment that aired on Monday in which he visited a key site on the hajj pilgrimage route where the Prophet Muhammad delivered his final sermon some 1,400 years ago.

He made clear he knowingly had slipped into Mecca with a driver, saying he is speaking in Hebrew quietly so no one can hear him. He claimed to be the first Israeli Jew ever to enter the city. He did not identify himself as Israeli or Jewish to the driver during the recordings.

In the clip that aired, Tamary and his Saudi driver pass a highway turnoff that says non-Muslims cannot pass, and then pass under a huge Quran replica that is the main gateway to the city. “The dream came true,” he says as they pass through Mecca and make their way to Mount Arafat.

After he climbs the mount, he says religious police are starting to ask questions and want to make sure he is a Muslim. They decide to leave.

Mecca is home to Islam’s holiest shrine, the cube-shaped Kaaba, the metaphorical house of God located in the city’s Grand Mosque. The shrine marks the point toward which observant Muslims worldwide pray five times a day. It is also the ultimate destination for the Muslim hajj and smaller umrah pilgrimage.

The reporter and Channel 13 responded on Twitter after the report aired. The news channel, in both Hebrew and Arabic, said Tamary’s report was driven by “journalistic curiosity” and a desire to witness and see things firsthand. The popular Israeli channel apologized for any anger stoked by his visit, which occurred during President Joe Biden’s trip to the nearby city of Jeddah. The Times of Israel quoted an unnamed source familiar with the matter saying Israeli government officials were satisfied with the statements issued by the channel and its reporter.

Police in Mecca said they also referred the journalist’s actions to public prosecutors, though the Israeli national is no longer in the kingdom.

The Saudi statement did not identify the journalist, saying only he was non-Muslim and had U.S. citizenship, implying he’d entered the country using his American passport since the kingdom has no formal ties with Israel.

Police called on visitors to respect the country’s laws, particularly when it comes to Mecca and Islam’s holiest sites in the kingdom.