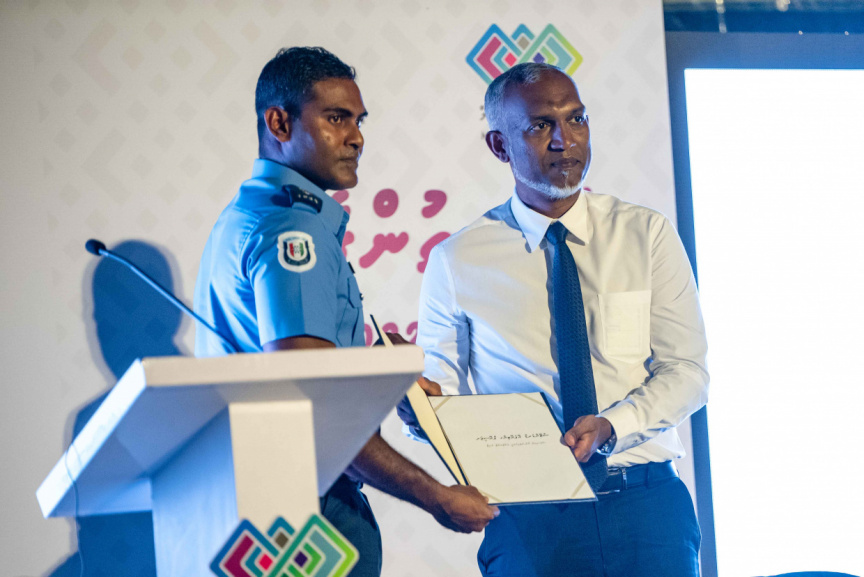 A ‘special constabulary service’ has been introduced to further improve municipal services in Male’ City.

The new service was inaugurated at community meeting held by Male’ City Council on Tuesday night. In this regard, the SOP pertaining to matter was handed over by Male’ City Mayor Dr. Mohamed Muizzu. Chief Inspector of Police Hussain Ahzam received the SOP on behalf of Maldives Police Service.

Following the inauguration – a video presentation on how the service will be implemented was showcased at the meeting.

As per the video presentation, the service will be made available for Male’ and Vilimale’ residents starting from August. Tasks undertaken under the service include removal of objects discarded in areas considered as public spaces in Male’ City.

Apart from this, special constabularies will ensure work sites have the necessary permits to carry out the respective work. Other tasks detailed in the presentation included oversight of waste management, ensuring integrity of no-smoking areas and decreasing unlawful activities.

However, the highest priority of special constabularies as per the presentation is to ensure the integrity of mosques and maintain order on roads.

Commenting on the inauguration of the service, Male’ City Council said that individuals will only be fined for a violation of law after being cautioned on multiple instances. The council revealed plans to conduct awareness programs for the public regarding the service.

In addition to the inauguration of special constabulary service – Male’ City Mayor Dr. Mohamed Muizzu revealed that efforts were underway to develop a picnic area in Vilimale’ during last night’s meeting.

The concept of picnic area being developed at Vilimale’ was also unveiled.

Being developed at the beach currently used for swimming – the picnic area will have a barbecue area, separate toilet blocks for men and women, and open showers.

“We plan on making this development with dayrooms, open shower, and all these facilities,” he said.

He underscored that the city council planned on developing the picnic area in six months.