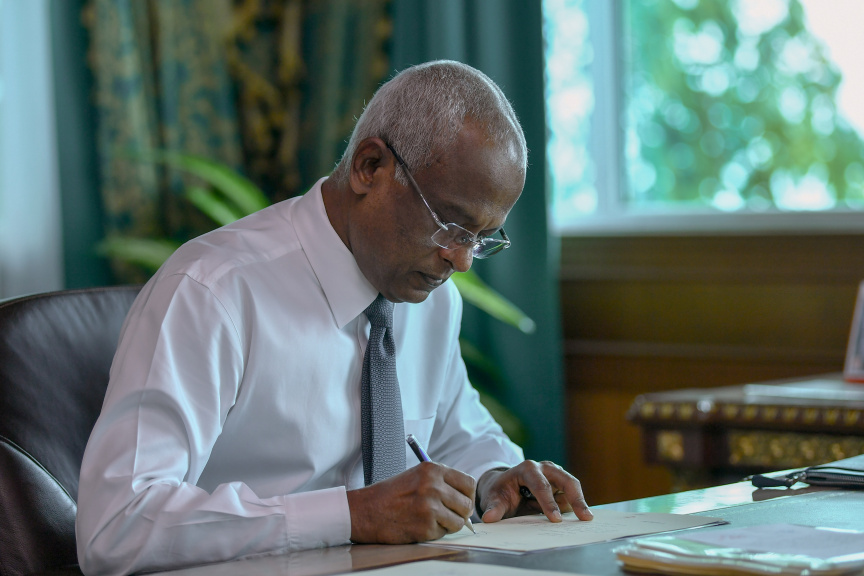 President Ibrahim Mohamed Solih, on Monday, has ratified the Evidence Bill into law including the provision which allows courts to compel journalists to disclose their sources in some circumstances.

The bill submitted by North Thinadhoo MP Abdul Mughnee on behalf of the government was reviewed by Parliament’s Judiciary Committee.

Fifteen amendments were proposed to the report formulated by the Judiciary Committee following their review of the bill, which were approved by the floor. The Evidence Bill was passed into law including these 15 amendments by the votes of 50 parliamentarians. Five members voted against passing the bill – whilst two members abstained.

Maldives Journalist Association (MJA) and Maldives Media Council (MMC) had shared concerns they had regarding the bill with the Judiciary Committee.

In this regard, MJA has stated that in a circumstance where a source is revealed – the safety of the person and people related to them is not guaranteed.

Both MJA and MMC also stressed that international treaties which Maldives has become a party to include the right for a journalist to protect their source or the person giving the information.

Article 136 of the Evidence Bill stipulates two exceptions under which the courts can compel journalists to reveal their sources.

However, Article 136 (a) of the bill states that if the source had given information to journalist under the condition that his or her identity be not disclosed – no authority can compel the journalist or news outlet they work in to disclose the source without their consent.

Despite this provision – Article 136 (b) of the bill states that court can compel journalist to reveal their sources if requested by an investigative body, Prosecutor General’s Office, the suspect or the defendant in cases pertaining to terrorism or national security.

Judiciary Committee’s report read that this amendment was included with reference to regulations on compelling journalists to disclose sources in an independent and democratic society, and also in consideration of concerns raised by MJA and MMC regarding the provision outlining exceptions under which journalists can be compelled to disclose sources.

A petition with the signatures of 158 journalists was submitted to President Ibrahim Mohamed Solih subsequent to the parliament’s approval of the bill – which urged against ratifying the bill with the source disclosure provision.