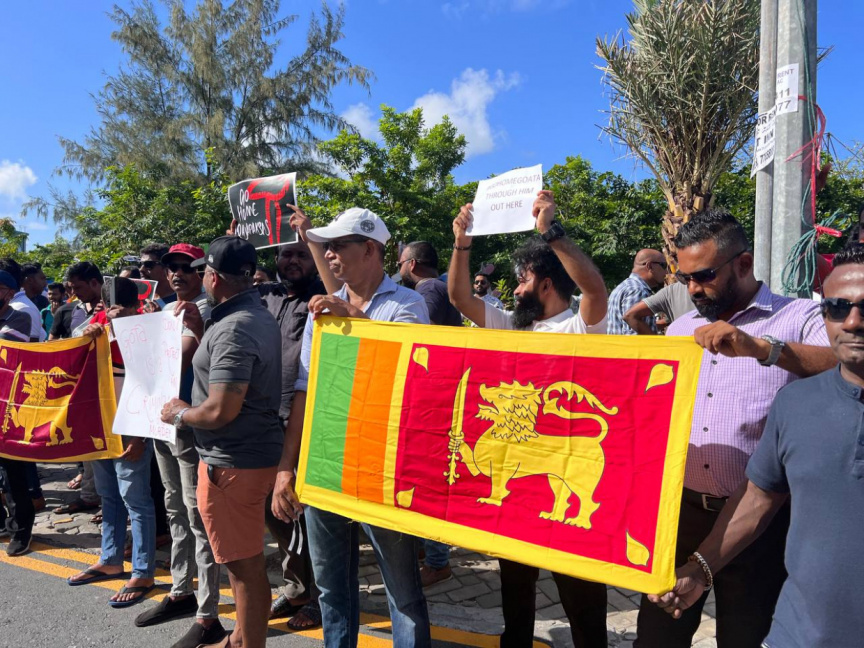 Sri Lankans residing in the Maldives have commenced protests against the country’s embattled President Gotabaya Rajapaksa in capital Male’ City.

The protest was prompted following President Rajapaksa’s arrival in the Maldives on an AN32 troop transport plane from the Sri Lanka Air Force in the early hours of Wednesday,

The protest saw the partition of some Maldivian citizens as well. They urged against granting asylum to President Rajapaksa.

Mere minutes after the protest had commenced – police officers had intervened, seizing posters used by the protestors and forcing them back.

Shortly after this, the protestors vacated the premise. No violence was reported during this protest.

No Maldivian authorities have issued official statements regarding President Rajapaksa’s arrival in the country.

Sri Lankan presidents are protected from arrest while in power, and it is likely Rajapaksa planned his escape while he still had constitutional immunity. He was scheduled to announce his official resignation on Wednesday evening.

Reports state that President Rajapaksa had arrived in the Maldives at a time Sri Lanka’s Attorney General had requested its Supreme Court to issue a travel ban against him.

Civilian protestors accuse the president and his relatives of siphoning money from government coffers for years and Rajapaksa’s administration of hastening the country’s collapse by mismanaging the economy. Although the family denies the corruption allegations, President Rajapaksa acknowledged some of his policies contributed to the turmoil.

Sri Lankan Parliament Speaker Mahinda Yapa Abeywardena said that Rajapaksa appointed the current Prime Minister Ranil Wickremesinghe to serve as acting president in the interim — an arrangement that further enraged protesters who want him out immediately.

However, he stressed that President Rajapaksa assured he would render his resignation later today.