Ministry: Took Ameenee Magu project as it won't be carried out by a PPM council 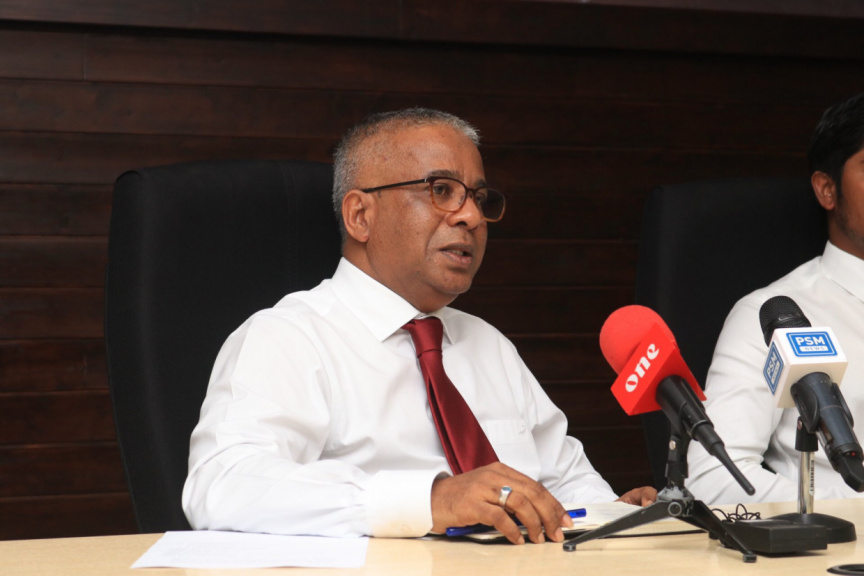 Planning Ministry, on Tuesday, has stated that the project to develop Ameenee Magu was taken from Male’ City Council after being made sure that a PPM-dominated council will not develop the road up to quality standards.

Planning Ministry executed an agreement with Road Development Corporation (RDC) for the development of Ameenee Magu under the Male’ Street Scaping Project on Sunday. The scope of the project includes developing 7.1 kilometers of asphalt road and the installation of a storm drain system and street lights.

At a press conference held on Tuesday night, State Minister for Planning Akram Kamaluddin underscored that Male’ City Scaping Project was inaugurated in 2019, under the instructions of President Ibrahim Mohamed Solih for the quality development of Male’ City roads.

He detailed that a concept plan was formulated for the project and finalized following discussions and guidance of the previous council and parliament members. Following finalization, he said RDC commenced work on the project at the instruction of the council in January 2020.

Underscoring that the work had continued to an extent following the election of the current council – State Minister Akram said that additional changes were then brought to the existing scope.

“After carrying out the work with the new changes, an effort was made to make further changes. Thus, the Ministry said that if these changes fit within the scope and the budget, there is no issue. There was a cease of work after this. Underscoring the development of Ameenee Magu was a pertinent need for the people, the President had wished to initiate efforts to develop the road up to quality standards,” he explained.

State Minister Akram said that when the President’s request was relayed to Male’ City Mayor Dr. Mohamed Muizzu – he delayed giving a response after confirming he will look into the matter. He went on to state that Mayor Muizzu had later informed that a PPM-dominated council did not wish to develop Ameenee Magu up to quality standards.

“When Muizzu was told of the President’s request on multiple occasions, he said this was a PPM Council – and they did not wish to develop Ameenee Magu up to quality standards. Because he had remarked this, we became sure that the road development will not take place. Therewith, this administration then decided to overtake the project under the Decentralization Act, and move forward,” he stressed.

In an earlier statement, Mayor Muizzu said that the Ministry had overtaken the project after deciding the council was incapable of carrying it out in violated of the Decentralization Act – at a time a new agreement was made with additional changes to ‘Male’ City Scaping Project’ following discussions with the government.

RDC was previously contracted by Male’ City Council for the development of Ameenee Magu for MVR 39 million.

With reference to this fact, Mayor Muizzu alleged that Planning Ministry contracting RDC for the same work for MVR 84 million had involved corruption.

Over 8K forms filed for land, flats to Male' residents

Over 3K forms filed for land, flats for Male' residents