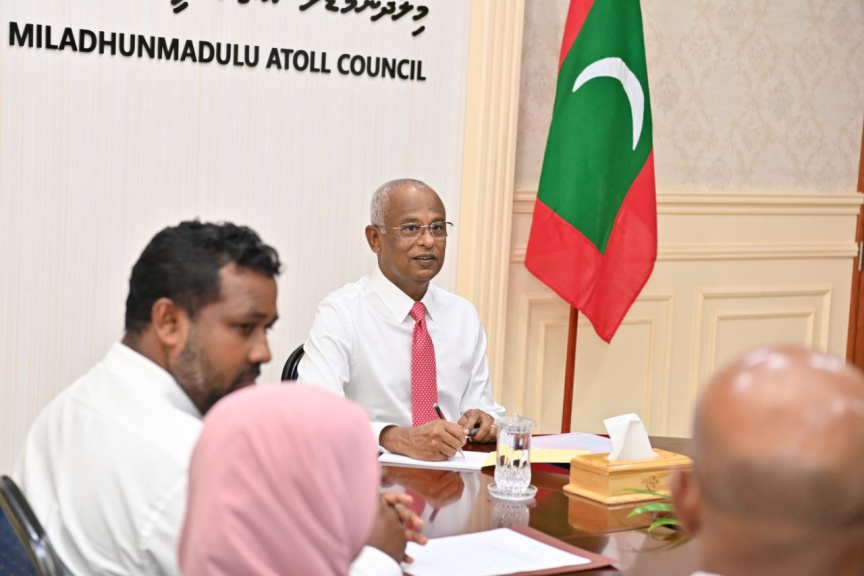 President Ibrahim Mohamed Solih on Saturday spoke of his commitment to ensuring equitable development of all islands, despite the political views of their respective communities.

He made this statement during his visit to Shahivani Atoll Funadhoo.

During this visit, he met with the Island Council and Women’s Development Committee (WDC) members. The council members expressed their gratitude to President Solih and his administration for assuring them of continued developmental progress, including land reclamation and coastal protection work.

Discussions were also held on other developmental needs of the residents. The council members noted the need to develop the roads leading to the airport and the changes required in the harbour before commencing RTL Ferry services.

Additionally, the council expressed their concerns about the football ground and youth centre development projects.

The President announced some developmental plans for the island at Funadhoo School’s golden jubilee ceremony held on Friday evening.

He stated that the land reclamation project would commence next year, while coastal protection work would begin soon.

Speaking about plans for the school, he noted that development was progressing of 15 classrooms in Funadhoo School, and announced that funds would be earmarked in the budget next year to establish an additional administrative building.

The President added that construction of a new hospital building would commence soon on the island as well.

The President spoke about the administration’s plans to improve healthcare services across the country and said it would find ways to ease any challenges.

Before these meetings, the President visited some government offices and institutions, including the Funadhoo Police Station and the Family and Children’s Service Centre. He also inspected the beach area affected by coastal erosion. A high-level delegation of government officials is accompanying the President on this trip.

'So much owed to teachers’ selfless hard work'