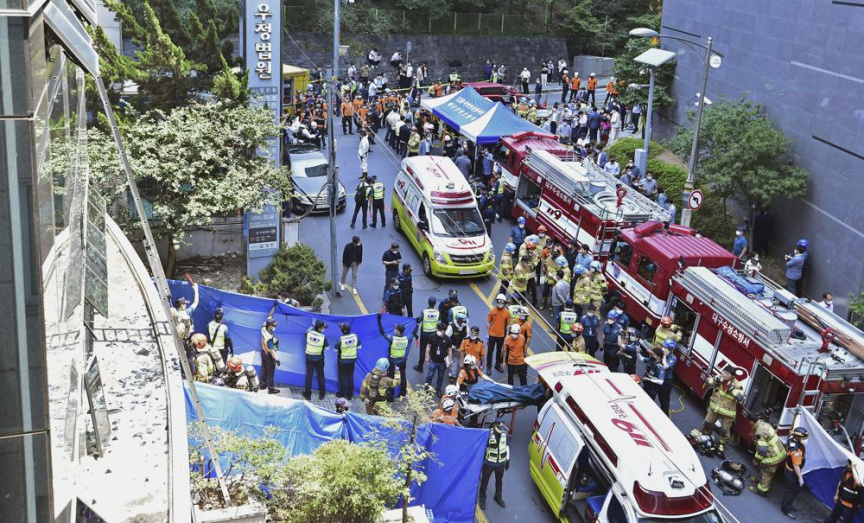 Dozens of firefighters and vehicles were deployed and quickly put out the blaze, which began in the late morning on the second floor of a seven-floor office building near the city’s district court.

Seven people were confirmed as dead, including an unidentified man who police suspect set the fire in a lawyer’s office. At least 41 people were hurt, mostly from smoke inhalation, and 26 of them were being treated at nearby hospitals, said Park Seok-jin, chief of Daegu’s Suseong district fire department.

No other people were trapped in the building, Park said. The relatively high death toll in a short period of time was possibly because the building didn’t have sprinklers on its office floors, according to Park, who didn’t answer directly when asked whether there were any lapses in legally required safety standards.

Jeong Hyeon-wook, an official from Daegu Metropolitan Police, said security camera footage shows the suspect leaving his home holding an apparent container with both hands that may have been used to set the blaze. Jeong said all of the dead people were found in the same room and that police were investigating possible motives. A team from the National Forensic Services was also deployed to the site.

With the suspect dead, it’s unclear whether anyone will be prosecuted over the fire unless police find an accomplice, Jeong said.

South Korean media published photos they said were received from witnesses that show smoke emerging from the building in Beomeo-dong, an affluent business district in Daegu, which is South Korea’s fourth-largest city and home to more than 2.6 million people.

Other photos showed broken windows, which Park said were caused by rescue efforts.

Lee Sang-min, South Korea’s Minister of the Interior and Safety, instructed officials to ensure a thorough investigation into the fire and provide swift help to the injured and families of the victims, the ministry said.

Daegu was the site of one of the worst arson attacks in South Korea’s history in 2003 when 192 people died after a 56-year-old man set fire on a subway train.

Moon calls for peace with North in farewell speech