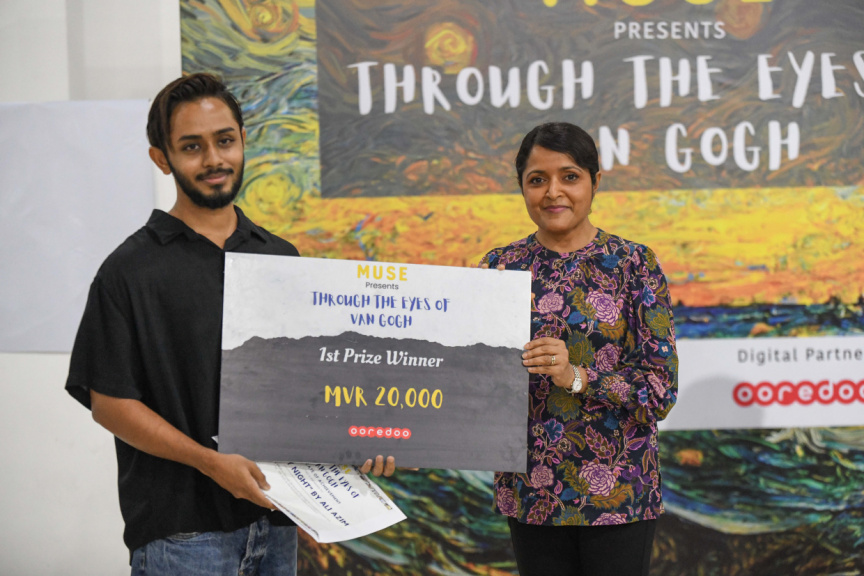 Local artist Ali Azim (Zim) has won top prize at the “Through the Eyes of Van Gogh” art exhibition organized by Muse.

The international art exhibition, which honors Vincent Willem van Gogh - one of the most famous and influential figures in Western art history - opened at the National Art Gallery in Male’ City on Wednesday evening.

Azim’s piece, which won the top prize, was named after the famous “The Starry Night” painting by van Gogh. He received an MVR 20,000 cash prize.

Heritage Minister Yumna Maumoon, who opened the exhibition, thanked Muse and all its partners for holding the international art exhibition.

Hussain Niyaz, the Chief Commercial Officer of Ooredoo Maldives – the digital partner of the event, said that all paintings showcased at the exhibition would be available for purchase via the company’s ecommerce platform Moolee.

He said that the over 300 submissions to the exhibition proved the event’s success.

Zim, who won top prize, said that he learnt about the exhibition last minute, and didn’t have much time to prepare.

“I created this painting my giving it my best in five days,” he said.

Zim said he made his painting after extensive research of van Gogh’s paintings.

He chose to paint the Sinamale’ Bridge to incorporate a Maldivian aspect to the piece.

Meanwhile, 15-year-old Zoya said she painted a picture of the Sinamale’ Bridge her mother took at night.

“I painted the photo my mother took in accordance with the theme,” she said.