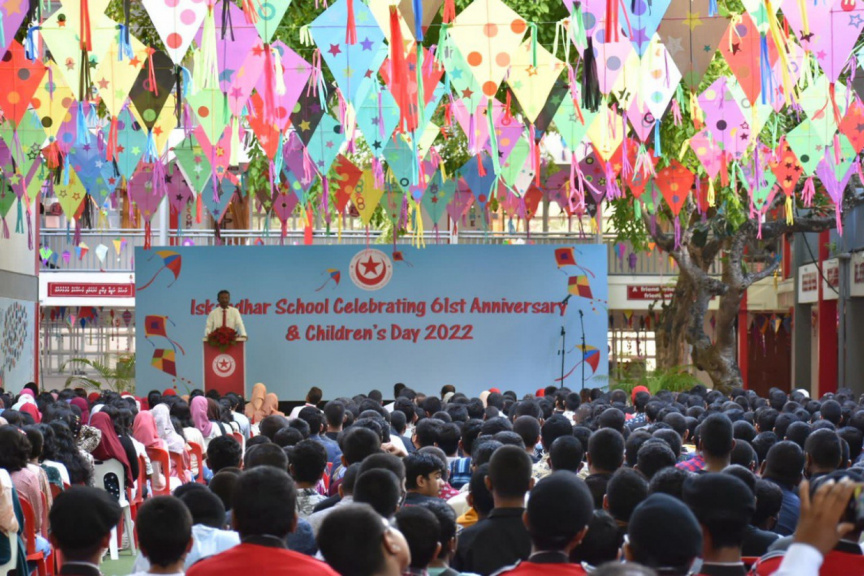 Iskandhar School, one of the oldest public schools in Male’ City, has celebrates its 61st anniversary.

Iskandhar School’s anniversary falls on May 10th – the Children’s Day. However, the school postponed its celebrations as the day fell in the month of Ramadan, and for various other reasons. The school celebrated its anniversary on Sunday.

The school’s principal Hussain Saeed told Sun the celebrations were held in two sessions – in the morning and in the afternoon. Dhivehi Bahuge Academy’s president Dr. Ashraf Abdul Raheem was invited as chief guest of the ceremony held in the morning.

Speaking at the ceremony, Dr. Ashraf highlighted on Iskandhar School’s long history. He also noted recent changes to the Dhivehi language, and stressed the need for students to revive and promote the language.

Hussain Saeed said that Dr. Ashraf’s speech impressed upon the students the importance of the Dhivehi language, and provided them with valuable information.

Hussain Saeed said that Iskandhar School had a vibrant history, and that it was the responsibility of all linked to the school to ensure the school’s name does not get lost in history.

Long-term employees of the school were presented with plaques of appreciation for the service at the ceremony. A talent show was held to showcase the talents of the students, and an exhibition to showcase their drawings.

The school also unveiled a special anniversary song, and cut a cake. The entire school was decorated with the support of the PTA, and parties were organized by students from each class.

“This is a day for the students. The students celebrated. The students expressed that they were happy to have the school decorated for them,” said Hussain Saeed.

Land issued from Phase II for development of 2 schools