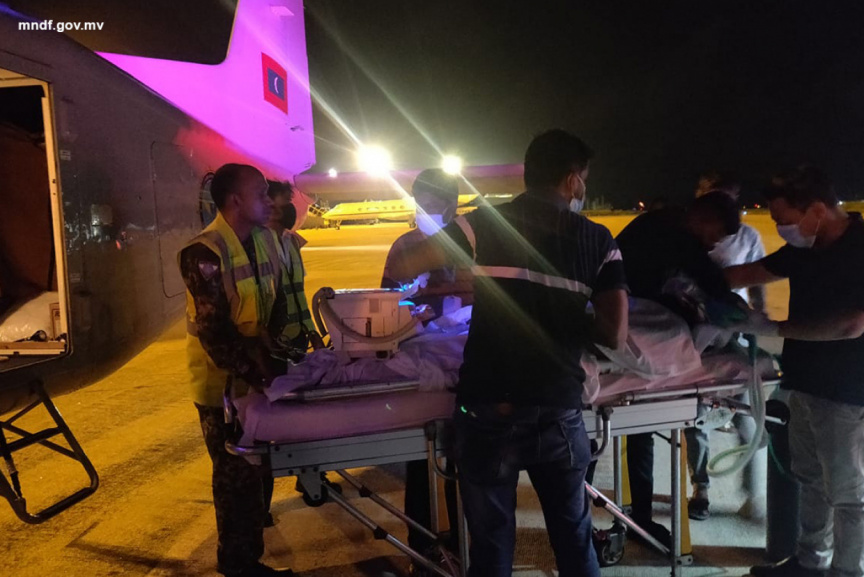 The youth who was put on ventilator support following a speedboat accident that took place at GA. Villingili on Saturday night has been transported to Male’ City for further treatment.

The speedboat, which was traveling with five onboard at the time of accident, crashed onto the entrance channel whilst entering Villingili harbor.

The remaining three passengers, in critical condition, have been undergoing medical treatment since last night. One of them, Misbah’s younger brother, Ishaq Abdul Muhsin, was put on ventilator support.

Maldives National Defense Force (MNDF) confirmed that a 30-year-old Maldivian man who is a victim of the speedboat accident was transported to Male’ City from Villingili Hospital at dawn today. He was transported on MNDF’s dornier aircraft.

Sun has learned that the remaining two passengers have also now been transported to Male’ City for further treatment.

A credible source told Sun that the speedboat had traveled from Villingili with four onboard to Pullman Maldives Maamuta to pick up Shafiu – the accident having occurred during their return trip.

Witnesses who saw the accident reported that the speedboat had crashed onto the entrance channel while traveling at high speed.

The deceased Misbah is survived by two wives; two sons under the age of 18 from the first wife and one son below the age of two from the second wife.

At the time of his death, Shafiu had not been married.