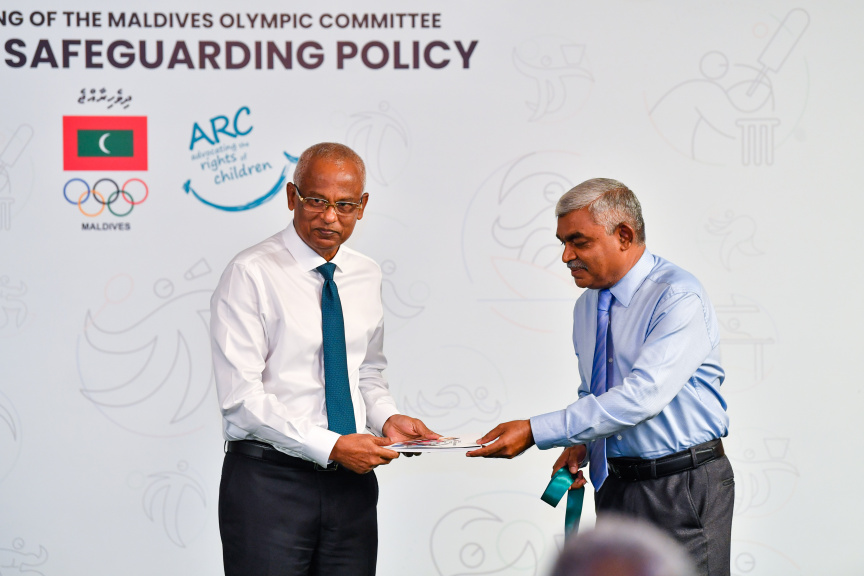 President Ibrahim Mohamed Solih states sports activities are important for both the physical and mental wellbeing of children.

He made the remark at the inauguration of Maldives Olympic Committee’s Child Safeguarding Policy on Wednesday afternoon.

“I believe this policy will promote the protection of the rights of children in all fields and areas,” he said.

President Solih said that up until recently, sports were treated as a pastime or recreational activity for children.

But the reality is sports enhance the mental capacity of children, he said.

President Solih said that his administration was taking steps to ensure children received full safety and protection in the sports field, and in all activities that involve children.

He noted that there were some children isolated from society and exposed to life of crime.

“All such situations are an obstacle to fully protecting the rights of children. And an obstacle to providing them too safety and protection,” he said.

President Solih said there are also children living with their family and relatives who are exposed to multiple forms of danger.

There are many threats in this society that prevent the protection of children, he said.

President Solih said that the Child Safeguarding Policy, once its implemented, will offer some solutions to the issues.

He said that the purpose of the policy wasn’t just to protect children in the sports field, but that it will raise awareness among children regarding their rights.

President Solih said the policy will be implemented nationally, and will be adopted by all national sports associations.

He thanked Maldives Olympics Committee and Advocating the Rights of Children (ARC) for compiling the policy.