Opposition calls to expedite assistance to locals in Sri Lanka 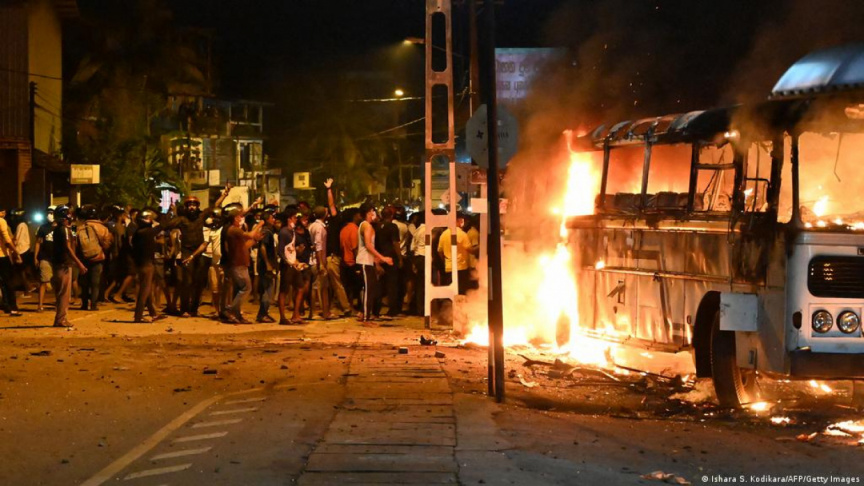 A bus torched amidst protests in Sri Lanka.

Opposition Coalition has called on the government to expedite assistance for Maldivians currently residing in Sri Lanka for different purposes amidst extreme uproars in the country.

The uproars in Sri Lanka have been triggered by the prolonged economic crisis faced by the country resulting from the economic mismanagement by the government that has led to citizens rising up against the government and its supporters. Violent clashes between anti-government protestors and government supporters resulting in casualties saw the imposition of a nationwide curfew till further notice.

In a statement released on Tuesday regarding the matter – Opposition Coalition comprising of Progressive Party of Maldives (PPM) and People’s National Congress (PNC) expressed concern over the escalating situation in Sri Lanka.

“Calling on the Maldivian government to ensure the safety and security of all Maldivians living in Sri Lanka, and facilitation of easy access to basic needs and services for them amidst the uncertainties faced in the country at the moment,” the statement read.

Opposition also urged the government to closely monitor the living situations of Maldivian citizens in Sri Lanka, the inquiry of their needs and expedition of the required assistance.

Apart from this, they also advised travelers to Sri Lanka to exercise caution as the situation may shit at any given moment.

Foreign Ministry, on Tuesday, confirmed that no report of injuries or harm to a Maldivian residing in Sri Lanka nor in need of basic necessities has been made to any authorities.

10 arrested in protest advocating for fishermen