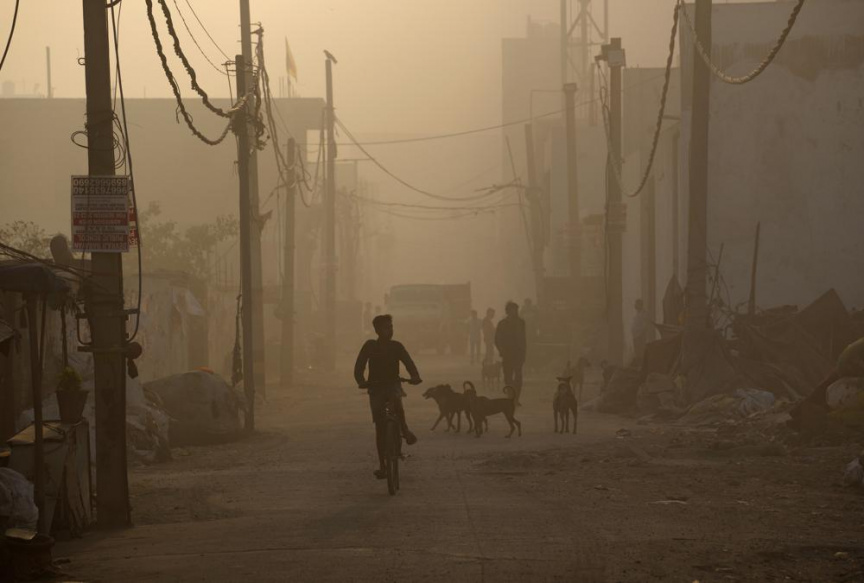 A boy rides a bicycle amidst thick smoke coming out of a fire at the Bhalswa landfill in New Delhi, India, Wednesday, April 27, 2022. (AP Photo/Manish Swarup)

The landfill in northern Delhi’s Bhalswa is taller than a 17-story building and covers an area bigger than 50 football fields. Waste workers who live in nearby homes had emptied onto the streets on Tuesday evening. But by Wednesday morning, the thousands of people who live and work at the landfill had begun the dangerous process of trying to salvage garbage from the fire.

“There’s a fire every year. It is not new. There is risk to life and livelihood, but what do we do?” asked Bhairo Raj, 31, an informal waste worker who lives next to the landfill. He said that his children studied there and he couldn’t afford to leave.

The Indian capital, like the rest of South Asia, is in the midst of a record-shattering heat wave that experts said was a catalyst for the landfill fire. Three other landfills around the Indian capital have also caught fire in recent weeks.

The landfill in the latest fire was planned for closure more than a decade ago, but more than 2,300 tons of the city’s garbage is still dumped there every day. The organic waste in the landfill decays, resulting in a build-up of highly combustible methane gas.

Several fire engines rushed to the landfill on Tuesday to try and douse the fire. At night, the landfill resembled a burning mountain and it smoldered until early morning.

March was the hottest month in India in over a century and April has been similarly scorching. Temperatures crossed 43 degrees Celsius (109.4 F) in several cities Tuesday and are forecasted to continue rising.

She said that unless the world stops adding greenhouse gases to the atmosphere, such heat waves will become even more common.

A political reckoning in Sri Lanka as debt crisis grows