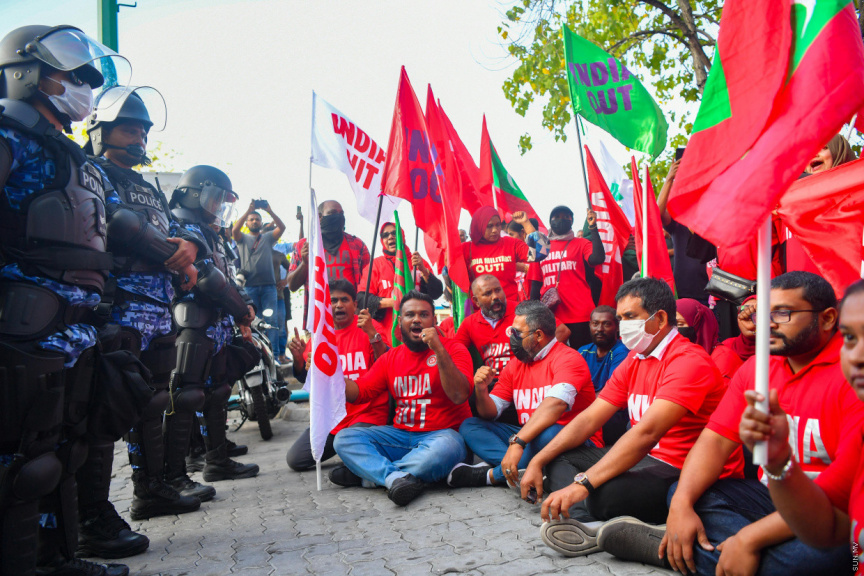 An emergency motion submitted to the Parliament on Monday morning, calling for the repeal of a presidential decree banning the ‘India Out’ movement, has been rejected.

‘India Out’ is a campaign led by the opposition, composed of PPM and PNC, to protest against Indian military presence in Maldives.

President Ibrahim Mohamed Solih issued a decree banning the ‘India Out’ movement on Thursday, after the National Security Council deemed the movement a threat to national security.

He said incitement to hatred against a specific country put Maldives at risk of loss of peace and stability, huge economic and social burden, and isolation in the international arena.

The opposition has expressed concern over the decree.

An emergency motion was submitted to the Parliament over the presidential decree by Maduvvari MP Adam Shareef Umar, the deputy leader of PNC, on Monday morning.

In his emergency motion, Adam Shareef said each Maldivian citizen had the freedom of engaging in activities that aren’t explicitly prohibited under Islamic sharia and law.

Adam Shareef stressed that the law declares any law or decree that infringes on rights guaranteed under the constitution as null and void.

He accused the government of infringing on the constitutional right to freedom of expression by using the police and government offices.

He called on the government to stop such action.

The motion, calling for the repeal of the presidential decree, was rejected with a vote of 27-5.

President Solih decreed on Thursday that political campaigns targeting a specific country without a justifiable cause posed a threat to national security.

He said that the ‘India Out’ movement was a deliberate attempt to hinder the longstanding relations between Maldives and India, and international efforts to maintain security in the region.

Huge ‘India Out’ banners hung outside the residence of opposition leader, former president Abdulla Yameen Abdul Gayoom, and the PPM headquarters were removed by police the same day the decree was issued.

The opposition continues to challenge the authorities, hanging up banners that read ‘In Dear Out’, a play on the words ‘India Out’, on buildings in the capital.