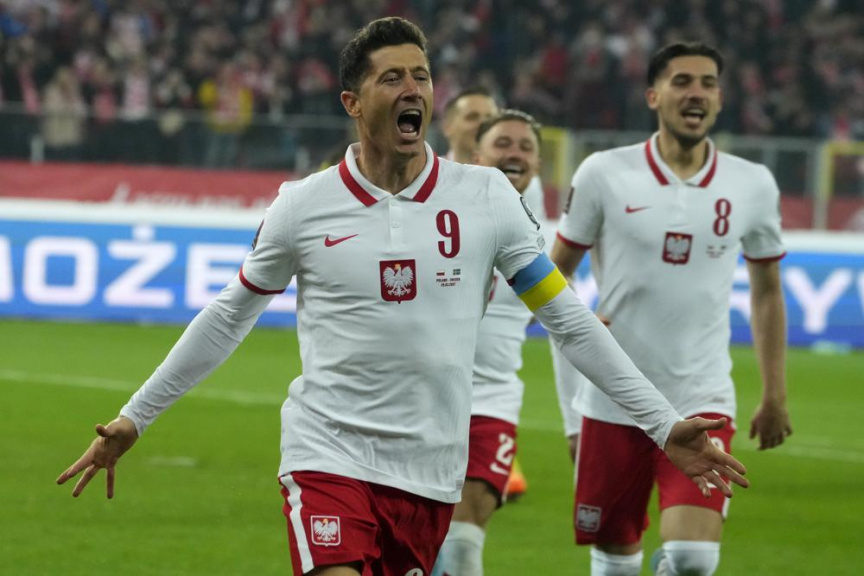 CHORZOW, Poland (AP) — Poland is heading to the World Cup — and of course Robert Lewandowski helped send his team there.

The prolific Bayern Munich striker converted a penalty in the 50th minute to set Poland on its way to a 2-0 win over Sweden on Tuesday in one of the European playoff finals for a place in this year’s tournament in Qatar.

Piotr Zieliński added the second goal in Chorzow for the Poles, who will be competing in soccer’s biggest event for the second straight time.

It might be the last opportunity for the 33-year-old Lewandowski, who took his tally of goals for his country to a remarkable 75 in 129 appearances.

“It was really tough, this pressure,” Lewandowski said. “Even though I have taken many penalties in my career, this was one difficult.

“I knew so many people were watching me at this moment ... I knew this moment would have so much significance. It was not easy to focus on the ball at that moment, but I managed to do it.”

As for Sweden’s own veteran striker, Zlatan Ibrahimovic, he surely won’t be playing at another World Cup.

The 40-year-old Ibrahimovic, not fully fit after a recent Achilles tendon injury, came on as an 80th-minute substitute but couldn’t find the goals to get Sweden through the playoffs again. In 2018, Sweden beat Italy over two legs at this stage to qualify — without Ibrahimovic, who was retired from international soccer then — but Poland crucially had the home advantage in a one-legged shootout this time and made it pay in Chorzow.

Asked if he would be seen again in Sweden’s national team, Ibrahimovic said: “I hope so. As long as I can stay healthy and play and contribute something, I hope so.”

Lewandowski showed composure from the penalty spot to place a finish into the bottom corner after a stuttering run-up, moments after Jesper Karlström was adjudged to have bundled into halftime-substitute Grzegorz Krychowiak.

Lewandowski said he was playing through the pain barrier.

“We have had many problems before this match — a lot of our players were injured, including me. I had problem with knee,” Lewandowski said.

“We suffered, but now we can celebrate. I am proud and happy.”

Zieliński’s goal came after a poor touch by Sweden center back Marcus Danielson, who failed to control a pass back to him. Zieliński ran through unchecked and curled a shot past goalkeeper Robin Olsen and just inside the post.

Sweden was left to rue missed chances either side of halftime by Emil Forsberg, who had close-range efforts saved by goalkeeper Wojciech Szczesny.

“I’m enormously disappointed,” Sweden coach Janne Andersson said. “This was a match we had within our reach. We created chances but didn’t score.

“Nothing went our way tonight. But you have to make sure that things go your way. You can’t blame other circumstances.”