Portugal tops N. Macedonia, Ronaldo makes it to another WCup 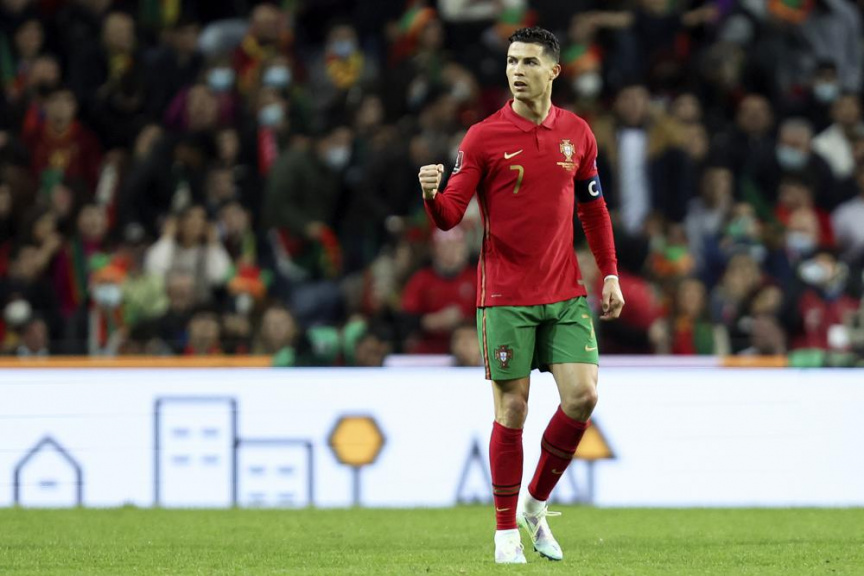 PORTO, Portugal (AP) — There will be at least one more World Cup for Cristiano Ronaldo.

The all-time top scorer in men’s international soccer will get to play in his fifth World Cup after Portugal defeated North Macedonia 2-0 in the European qualifying playoffs on Tuesday.

“Goal accomplished,” Ronaldo said on Instagram after the match. “We made it to the World Cup in Qatar. We are where we deserve to be.”

This time there was no stunning late winner for North Macedonia to eliminate the traditional powerhouse like against European champions Italy last Thursday in Palermo.

Bruno Fernandes opened the scoring for the hosts after a pass by Ronaldo in the first half and added another goal in the second to secure Portugal’s place in the World Cup for the sixth straight time.

“This is a special victory,” Fernandes said. “We reached our goal, which was what mattered. Portugal has played better matches, but this one will stay in our memories because it gave us a place in the World Cup.”

There will be no first finals appearance for North Macedonia, which was coming off its first participation in a major tournament at the 2020 European Championship.

After escaping the playoffs, Portugal will be a seeded team in Friday’s draw for soccer’s showcase event in November.

The 37-year-old Ronaldo will be playing in his 10th straight major tournament in a streak that started at Euro 2004. He has played in four World Cups and five Euros, winning the European title in 2016.

The highest scorer in men’s international soccer with 115 goals, Ronaldo is the only player to have scored at least once in the finals of nine top tournaments in a row.

Ronaldo and the rest of the squad gathered around a Portugal flag at midfield as the fans celebrated and sang the national anthem at the Estádio do Dragão in Porto.

“We are happy because the Portuguese people will get to see Portugal in a World Cup again,” coach Fernando Santos said. “The players showed they were fully committed from the start and defeated a difficult opponent.”

Portugal had also needed to go through qualifying playoffs for the 2010 and 2014 World Cups, beating Bosnia-Herzegovina in 2010 and Sweden in 2014.

It had been relegated to the playoffs this time after conceding late and relinquishing a lead at home in the final group game against Serbia last year. In the first game of the playoffs last week, Portugal defeated Turkey 3-1 in Porto after the visitors squandered an 85th-minute penalty kick that could have erased a two-goal lead from the first half.

“It would have been unfair for Portugal not to make it to the World Cup,” veteran defender Pepe said. “We showed our strength on the field to give this victory to our fans .”

Ronaldo missed Portugal’s first good chance in a breakaway the 14th minute on Tuesday, then gave a soft pass to his Manchester United teammate for the opening goal after a blunder by the North Macedonia defense in the 32nd. Fernandes entered the area and fired a low shot by the far post, then added to the lead from close range after a pass by Diogo Jota in the 65th.

North Macedonia, which gained independence from the former Yugoslavia in 1991, didn’t get past the group stage at last year’s Euro, losing all of its three matches. But in addition to the shocking 1-0 win against Italy last week, it had also surprised with a win at Germany last year in its European qualifying group, in which it finished second to the Germans and ahead of Romania.

Coach Santos had some important returns to the squad on Tuesday, with defenders Pepe and João Cancelo playing from the start after missing the game against Turkey. Pepe had tested positive for COVID-19, while Cancelo was suspended.

Failure to qualify for Portugal could have meant the end of the line with the national team for coach Santos and veteran players Pepe, José Fonte and João Moutinho, who are all 35 or older.