Kane the 2nd highest-scoring Englishman for his country 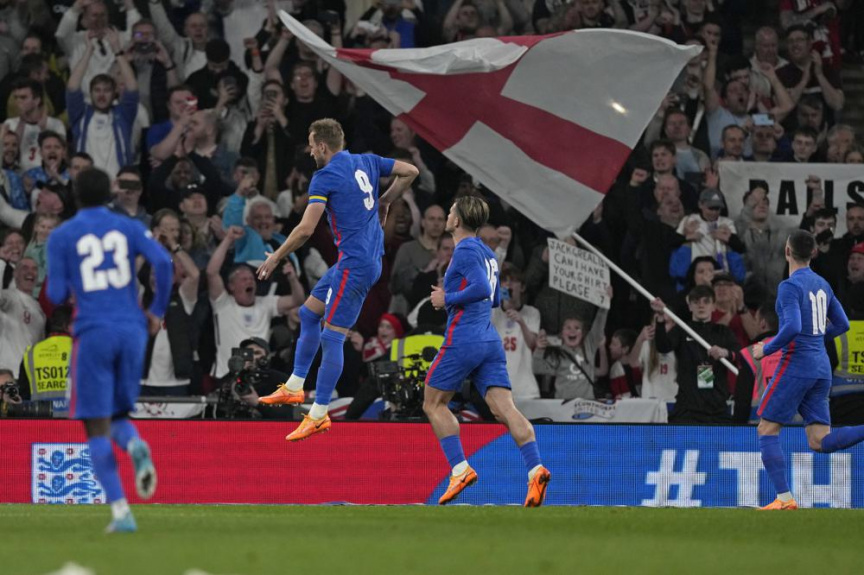 England's Harry Kane, center, celebrates after scoring a goal from the penalty spot during an international soccer match between England and Switzerland at Wembley Stadium in London, Saturday, March 26, 2022. (AP Photo/Alastair Grant)

LONDON (AP) — Harry Kane moved level with Bobby Charlton in second place on the all-time England men’s scoring chart by slotting a penalty to seal a 2-1 victory against Switzerland in a friendly on Saturday.

The captain’s 49th goal in 69 appearances for his country leaves him only four from leveling with the retired Wayne Rooney.

By converting from the spot after Steven Zuber handled, Kane completed a turnaround in a game that kick-started the buildup to the World Cup in November for both teams.

Before the tournament draw on Friday, there’s a chance for Kane to rack up more goals when the Ivory Coast visits Wembley Stadium to face the European Championship runner-up.

A crowd of 78,881 in north London saw England get off to a bad start when Breel Embolo headed Switzerland in front in the 22nd minute but Luke Shaw fired England level in first-half stoppage time.

England emerged for the second half having not made any changes but with a change of jerseys. The players’ names were removed from their jerseys to back the Alzheimer’s Society and raise awareness about dementia to show how people can lose memories — including the names of England stars.