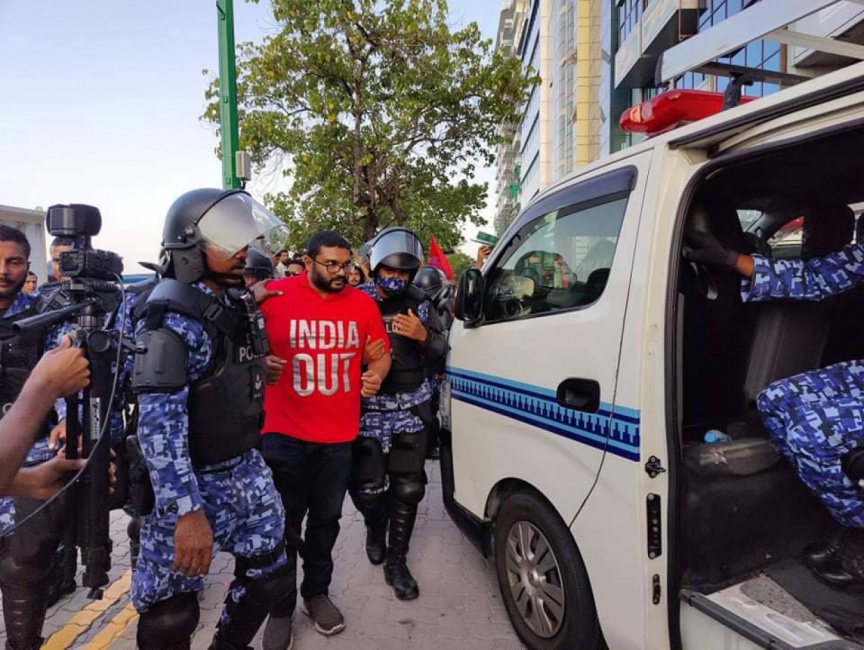 The opposition coalition, composed of Progressive Party of Maldives (PPM) and People’s National Congress (PNC), are holding the mass rally despite warnings by the police against holding it.

Whilst the rally was set to start at 4:00pm in the evening, Police had cordoned off the area in which PPM’s headquarters are located starting from 2:00pm this afternoon.

Prior to the commencement of the rally, Male’ City Deputy Mayor Ahmed Nareesh was also arrested.

When the rally had commenced – Police had impeded it, obstructing the participants. A number of civilians and politicians taking part in the rally have been arrested as well.

MP Ghassan, MP Saeed and former Hoarafushi MP Mohamed Ismail are amongst politicians that have been arrested.

PPM’s Spokesperson Heena Waleed said that Police have made a total of nine arrests so far.

The police, in a statement on Wednesday evening, warned they will not allow for the rally to be held, citing that there were multiple reasons to believe the opposition isn’t planning to hold the rally under Freedom of Assembly Act.

In a statement released by the opposition coalition this evening over the Police’s obstruction of their rally, the coalition condemned the government’s efforts to impede a peaceful demonstration planned, in compliance with the necessary laws.

They also urged to give a chance to carry on with the peaceful demonstration – and also requested to not physically assault civilians participating in the event.

“Calling on the immediate release of everyone who has been arrested. Urging and advising not to impede this party’s activities being carried out at Carnival area in line with the laws,” the statement also read.

'Security did not permit Yameen to take part in rally'