MATCHDAY: World Cup spot on the line for Italy and Portugal 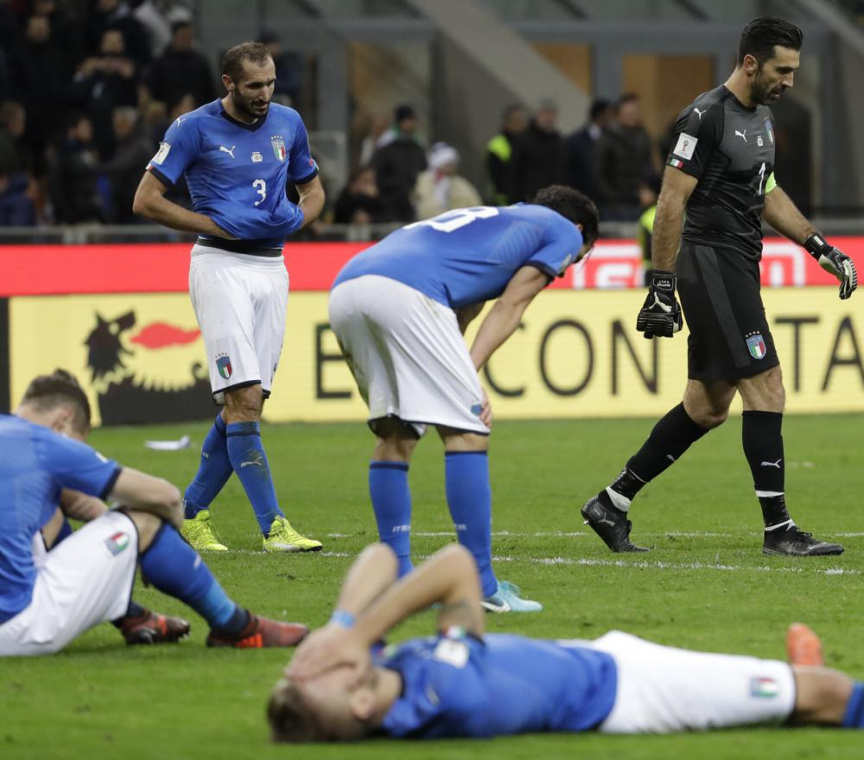 A look at the semifinal matches in the World Cup playoffs in Europe on Thursday:

Italy will have a makeshift defense as it attempts to banish the ghosts of its playoff defeat to Sweden in 2017. That loss saw the Azzurri fail to qualify for the 2018 tournament, one of the darkest moments in Italy’s soccer history. Missing two straight World Cups would be an unprecedented low point for the four-time champion, especially less than a year after winning the European Championship. Italy will not be able to draw on its most solid of foundations as the defense that starred in its Euro 2020 success will have to be changed. Leonardo Spinazzola and Giovanni Di Lorenzo are out injured and veterans Giorgio Chiellini and Leonardo Bonucci are both a doubt for the game in Palermo, Sicily. The winner will play either Cristiano Ronaldo’s Portugal or Turkey for a spot at the tournament in Qatar later this year. North Macedonia played in its first major tournament in Euro 2020 but lost all three of its group games. However, it achieved arguably its best result in its history when it beat Germany in qualifying last March. North Macedonia also held Italy to a 1-1 draw in Turin in the qualifiers for the 2018 World Cup. Italy needed two late Ciro Immobile goals to win the first match 3-2.

A loss for Portugal at home against Turkey could mean Cristiano Ronaldo may never play in soccer’s showcase event again. Ronaldo would be 41 years old by the time the next World Cup arrives. He is trying to make it to his 10th consecutive major tournament and is the only player to have scored at least once in the finals of nine top tournaments in a row. The star forward is set to start on Thursday, but coach Fernando Santos will have a depleted defense for the decisive game in Porto as both regular starting central defenders won’t be available. Veteran Pepe is out after testing positive for COVID-19, while Rúben Dias is injured. Santos is also missing other players because of injuries. It could be the end of the line for Santos with Portugal if the national team fails to advance. He has been at the helm since 2014, winning the 2016 European Championship.

The two teams will be without their leading strikers in Stockholm as they look to secure a place in Tuesday’s playoff final against Poland, which has been given a bye following Russia’s exclusion as a result of its invasion of Ukraine. Zlatan Ibrahimovic is suspended for Sweden while Patrick Schick was ruled out for the Czechs because of a calf injury. Czech coach Jaroslav Šilhavý is without his entire first-choice defense from last year’s European Championship, including right back Vladimír Coufal, who just had groin surgery. While Sweden reached the quarterfinals at the 2018 World Cup, the Czechs are looking to qualify for the first time since 2006.

Austria hasn’t been to the World Cup since 1998. For Wales, the wait is much, much longer — 40 years earlier, in fact. So the two countries are looking to make up for lost time when they meet at Cardiff City Stadium for the right to play either Scotland or Ukraine in the playoff final in their bracket. That won’t take place until June, at the earliest, because the Scotland-Ukraine match has been postponed until then due to the war in Ukraine. Gareth Bale is set to play for Wales despite limited game time at Real Madrid this season and is looking to lead his country to a showpiece that Welsh greats like Ryan Giggs, Ian Rush and Mark Hughes never played in. Wales is unbeaten in its last 16 home games.

Hazard to undergo surgery to remove plate from leg