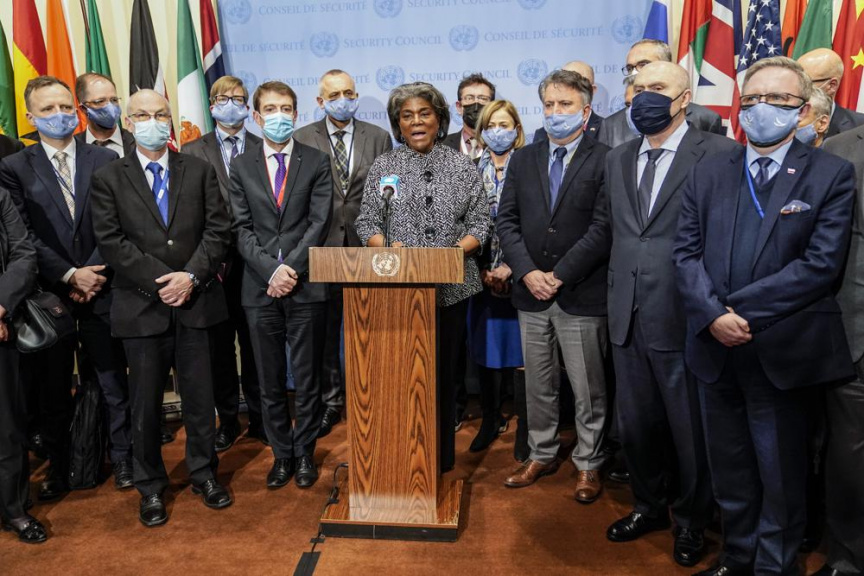 UNITED NATIONS (AP) — Russia vetoed a U.N. Security Council resolution on Friday demanding that Moscow immediately stop its attack on Ukraine and withdraw all troops, a defeat the United States and its supporters knew was inevitable but said would highlight Russia’s global isolation.

The vote was 11 in favour, with Russia voting no and China, India and the United Arab Emirates abstaining, which showed significant but not total opposition to Russian President Vladimir Putin’s invasion of his country’s smaller and militarily weaker neighbour.

The resolution’s failure paves the way for supporters to call for a quick vote on a similar resolution in the 193-member U.N. General Assembly, where there are no vetoes. There was no immediate word on a timetable for an assembly vote.

The vote was delayed for two hours the United States and Albania, which co-sponsored the resolution, and their supporters scrambled behind the scenes to get wavering nations to support the resolution. China’s decision to abstain, rather than use its veto alongside usual ally Russia, was seen as a diplomatic achievement.

Brazil’s Ambassador Ronaldo Costa Filho, whose country’s vote was initially in question but turned into a yes, said his government is “gravely concerned” about Russia’s military action. “A line has been crossed, and this council cannot remain silent,” he said.

In response, Russian U.N. Ambassador Vassily Nebenzia reiterated his country’s claims that it is standing up for people in eastern Ukraine, where Russian-backed separatists have been fighting the government for eight years. He accused the West of ignoring Ukrainian abuses there.

“You have made Ukraine a pawn in your geopolitical game, with no concern whatsoever about the interests of the Ukrainian people,” he said, calling the failed resolution “nothing other than yet another brutal, inhumane move in this Ukrainian chessboard.”

China’s U.N. Ambassador Zhang Jun said China abstained because all efforts must be made for a diplomatic solution and a response from the Security Council “should be taken with great caution rather than adding fuel to fire.” He warned that Western sanctions “may completely shut the door to a peaceful solution” and echoed Russian claims that it is being threatened by NATO’s expansion over the years.

“Russia’s legitimate security aspirations should be given attention and addressed properly,” Zhang said, and “Ukraine should become a bridge between east and west, not an outpost for confrontation among major powers.”

“Russia’s only act of self-defence is the vote they have cast against this resolution today,” she said.

“There will be no hospitality for your troops in our territory,” he told Russia’s Nebenia.

“You can stop a vote in this chamber,” Kyslytsya said. “But what may stop the war is unfortunately the bodies, and thousands of bodies of Russian soldiers that will be delivered to their mothers in Russia — whether you like it or not — because we have to defend our territory. We have to defend ourselves.”

Speaking to reporters after the meeting, U.N. Secretary-General Antonio Guterres recalled that “the United Nations was born out of war to end war.”

“Today, that objective was not achieved,” he said. “But we must never give up. We must give peace another chance.”

The resolution’s supporters had agreed to weaken the text to get additional support. They eliminated putting the resolution under Chapter 7 of the U.N. Charter, which can be enforced militarily, and language stating “that the situation in Ukraine constitutes a breach of international peace and security, and that the Russian Federation has committed acts of aggression against Ukraine.” They also changed “condemns” to “deplores” in sections about Russia’s actions.

In the draft that was put to a vote, the council would have deplored Russia’s “aggression” against Ukraine “in the strongest terms” and demanded an immediate halt to its use of force and the immediate, complete and unconditional withdrawal of all Russian forces from Ukraine’s internationally recognized borders.

It would have deplored Russia’s Feb. 21 decision declaring areas of Ukraine’s Donetsk and Luhansk regions independent and would have ordered Russia to “immediately and unconditionally reverse the decision.” And it would have reaffirmed the council’s commitment “to the sovereignty, independence, unity, and territorial integrity of Ukraine within its internationally recognized borders.

In a show of support before the meeting, representatives of the 27 nations belonging to the European Union stood outside the Security Council chamber behind Ukraine’s blue and yellow flag with Ukraine’s Kyslytsya.

Thomas-Greenfield, the U.S. ambassador, said supporters of the resolution will be taking the issue of Russia’s invasion to the assembly where “the nations of the world can, will and should hold Russia accountable and stand in solidarity with Ukraine.”

“Russia cannot, and will not, veto accountability,” she said, surrounded by dozens of ambassadors from supporting countries.