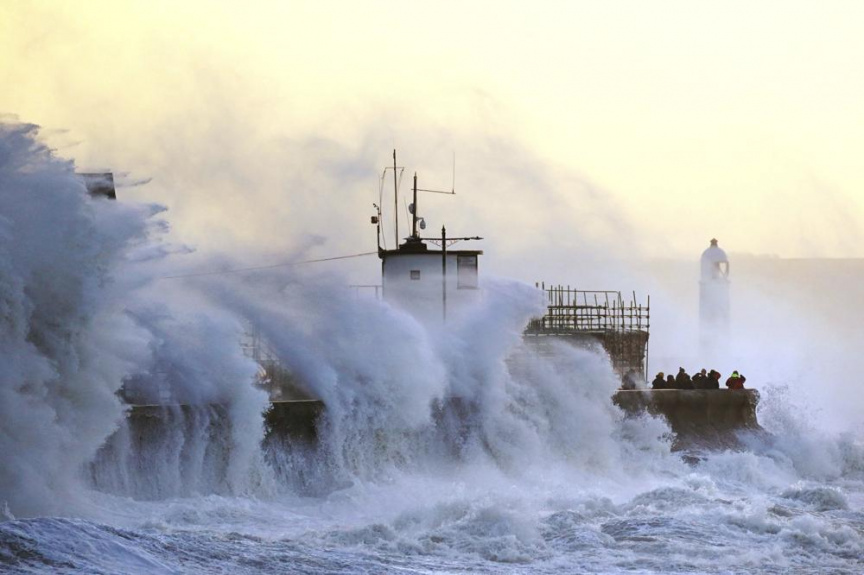 The U.K. weather service said a gust provisionally measured at 122 mph (196 kph), thought to be the strongest ever in England was recorded on the Isle of Wight as Storm Eunice swept across the country’s south. The weather system, known as Storm Zeynep in Germany, is now pushing into the European mainland, prompting high wind warnings in Belgium, the Netherlands, Denmark and Germany.

The storm caused mayhem with travel in Britain, shutting the English Channel port of Dover, closing bridges linking England and Wales and halting most trains in and out of London.

At least three people died in Britain, including a man in southern England killed when a car hit a tree, another man whose windshield was struck by debris in northwest England and a woman in her 30s who died in London when a tree fell on a car, police said.

In the Netherlands, firefighters said three people were killed by falling trees in and around Amsterdam, and a fourth died in the northern province of Groningen after driving his car into a fallen tree.

In neighboring Belgium an elderly man died when high winds pushed him into a canal in Ypres. In County Wexford, Ireland, a local government worker was killed as he responded to the scene of a fallen tree, the local council said.

Eunice is the second named storm to hit Europe this week, with the first storm killing at least five people in Germany and Poland. Peter Inness, a meteorologist at the University of Reading in England, attributed the storms to an unusually strong jet stream over the eastern Atlantic Ocean, with winds close to 200 mph (321 kph) at high altitudes.

“A strong jet stream like this can act like a production line for storms, generating a new storm every day or two,” Inness said. “There have been many occasions in the recent past when two or more damaging storms have passed across the U.K. and other parts of Europe in the space of a few days.”

The forecast led British authorities to take the unusual step of issuing ”red” weather warnings — indicating a danger to life — for parts of southern England, including London, and Wales that lasted through early afternoon. A lower level amber warning for gusts up to 80 mph covers the whole of England from 5 a.m. to 9 p.m.

Even before Britain was hit by the full force of the storm, Eunice disrupted travel across southern England and Wales with many train services interrupted and numerous flights and ferry services cancelled. A number of tourist attractions in England, including the London Eye, Legoland and Warwick Castle, closed ahead of the storm, as were all of London’s Royal Parks.

In the town of Wells in southwest England, the wind toppled the spire of a 19th-century church. In London, high winds ripped sections of roofing from the 02 Arena, a landmark on the south bank of the River Thames that was originally known as the Millennium Dome. Firefighters evacuated 1,000 people from the area.

“I urge all Londoners to stay at home, do not take risks, and do not travel unless it is absolutely essential,″ Mayor Sadiq Khan said before the storm.

The storm was expected to hit northern Germany later Friday and sweep eastward overnight. A flood warning was issued for Germany’s North Sea coast on Friday. Meteorologists warned Friday’s storm could cause more damage than the earlier weather system, which triggered accidents that killed at least three people, toppled trees and damaged roofs and railroad tracks.

Germany’s biggest rail operator, Deutsche Bahn, cancelled all train services in the north of the country on Friday due to the storm.

In the Netherlands, authorities sent a push alert to mobile phone users on Friday afternoon, warning them to stay indoors.

The Dutch weather institute earlier issued its highest warning, code red, for coastal regions and code orange for much of the rest of the low-lying nation. The country’s rail company said it would halt all trains nationwide from 2 p.m. (1300 GMT). The airline KLM cancelled dozens of flights at Amsterdam’s Schiphol Airport.

In The Hague, high winds tore off part of the roof of soccer club ADO The Hague’s stadium. There were no immediate reports of injuries.

At Scheveningen beach in The Hague, authorities built walls of sand to protect beachfront bars from the storm, even as dozens of surfers braved the weather in search of storm-driven waves.

In Denmark, strong winds prompted authorities to ban light vehicles from crossing the Storebælt tunnel and bridge linking the central island of Funen to Zealand, home to the capital, Copenhagen.

Storm Eunice produced heightened concern because it had the potential to produce a “sting jet,” a small area of intense winds that may exceed 100 mph.

One example of such a phenomenon occurred during what’s known as the Great Storm of 1987, which killed 18 people and knocked down 15 million trees across the U.K., according to the Met Office.

Liz Bentley, chief executive of the Royal Meteorological Society, described the phenomenon as being akin to a scorpion in the sky.

“It’s often referred to as a sting-jet because it’s like it’s the sting in the tail as the storm moves through,″ she said. “And that’s usually the bit where the strong winds are — right on the tip of that curl of cloud.”

Train operators across Britain urged passengers to avoid traveling on Friday and many services shut down. Airlines warned of delays and cancelled flights at airports in southern England, including London Heathrow, where hundreds of flights were canceled.

Friederike Otto, a climate scientist at Imperial College who is an expert in extreme weather events, said there is no evidence climate change is leading to more violent storms in Europe.

But she said the damage caused by such storms has increased because rainfall has become more intense as a result of human-caused climate change.

“The second thing is that sea levels have risen,” said Otto, who is part of World Weather Attribution, which investigates the link between extreme weather and global warming. “This means that storm floods, which also occur during such storms, (are) higher and therefore lead to greater damage than there would be without climate change.”

MET: Weather will begin to clear on Thursday