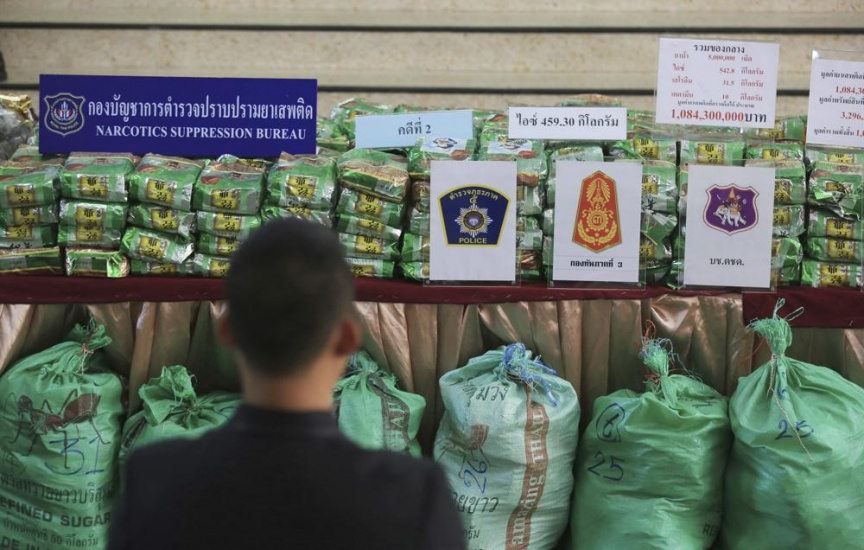 BANGKOK (AP) — Police in Laos have made their second huge seizure in three months of methamphetamine, a development that a U.N. expert on the illicit drug trade said Saturday reflects a breakdown of security in Southeast Asia.

Jeremy Douglas, the regional representative for the United Nations Office on Drugs and Crime, said the seizure of 36.5 million methamphetamine tablets in the northwestern province of Bokeo was the region’s second largest after 55.6 million meth pills were captured in October in the same province.

He warned that the Mekong River region, where the seizure took place, was experiencing a surge of drug production and trafficking that required strong efforts to get under control.

“Organized crime treat the Mekong region like a playground — it has all the elements they look for,” he said.

Lao Security Radio, a state broadcaster, said on its website that four residents of the province were arrested Wednesday in Huay Xai district in a raid that also captured 590 kilograms (1,300 pounds) of crystal meth — also known as ice — a minor amount of heroin and a pistol.

Bokeo borders on Myanmar and Thailand, a frontier area known as the Golden Triangle that’s infamous for the production of illicit drugs. Heroin and the opium from which it is derived have been joined in recent decades by methamphetamine, mostly produced in Myanmar, especially its Shan state.

“Production in Shan is off the charts, and Laos is now a favored gateway for traffickers,” Douglas said in an email. Thailand is a major market for drugs from Myanmar, which are also shipped onward to other countries. Laos is a poor, sparsely inhabited landlocked country with a reputation for corruption that can facilitate smuggling.

Myanmar has been in turmoil since February last year, when the military seized power from the elected government of Aung San Suu Kyi. It now faces an armed challenge from foes of military rule, disrupting normal law enforcement operations to suppress the drug trade. The situation is further complicated because drug production is often associated with armed ethnic minority groups involved in political struggles with the government and sometimes with each other.

“Drugs and conflict in Shan have been connected for decades. But as security has broken down, especially the last eight or nine months, we’ve seen an explosion of supply hitting the Mekong and Southeast Asia,” Douglas said. “Neighbors like Thailand and Laos have been flooded with meth in recent months.”

“There are no easy fixes given the governance situation in Shan,” he said.

If the region wants to start slowing drug flows out of the Triangle, Douglas said governments need to get a grip on chemical trafficking, secure borders and make it more difficult to launder money.