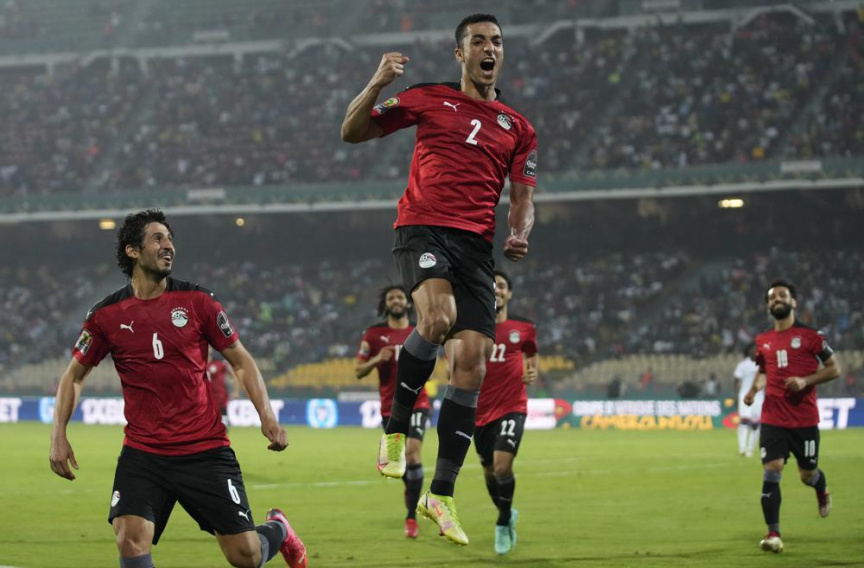 Egypt's Mohamed Abdel-Moneim, middle, jumps as he celebrates with teammates after scoring his team's first goal, during the African Cup of Nations 2022 group D soccer match between Egypt and Sudan on Jan. 19, 2022. (AP Photo/Themba Hadebe)

YAOUNDE, Cameroon (AP) — Egypt qualified for the knockout stage at the African Cup of Nations on Wednesday and put a stop for now to the run of surprise results that has shaken the tournament over the last few days.

Egypt saw off Sudan 1-0 in their final Group D game in Yaounde, confirming its place in the round of 16 after qualifying second in the group behind Nigeria.

Defender Mohamed Abdelmonem headed home a corner on 35 minutes after a period of sustained pressure from Egypt.

Nigeria won 2-0 against Guinea-Bissau in the other group game having already qualified for the last 16 as group winner.

Nigeria had second-half goals by Umar Sadiq and William Troost-Ekong and is the only team to come through the group stage with three wins. The goals delighted interim coach Augustine Eguavoen, who jumped off the bench and threw his arms in the air.

Eguavoen is due to give up the coaching duties after the African Cup but there might just be calls for the former African Cup-winning captain to stay if Nigeria keeps winning with him as coach.

Egypt would no doubt have had nerves jangling after seeing the fate of some of its fellow former champions in Cameroon.

Defending champion Algeria was beaten 1-0 by Equatorial Guinea on Sunday in a result that seemed certain to be the shock of the tournament until four-time winner Ghana’s jaw-dropping elimination at the hands of tournament debutant and tiny island nation Comoros on Tuesday.

Egypt had underwhelmed in its start in Cameroon, losing to Nigeria and then only scraping past Guinea-Bissau in its second group game, thanks to Mohamed Salah’s goal and a brilliant late equalizer by Guinea-Bissau being contentiously disallowed.

Egypt still isn’t in top gear but there were better signs against Sudan.

Mostafa Mohamed and Abdallah Said were both denied by Sudan goalkeeper Mohamed Mustafa in the first half.

Salah showed some of his best skill this tournament as he weaved past defenders and let off a low shot that was saved by Ali Abu Eshrein, who came on in place of Mustafa.

Salah also set up Amr el-Solia in front of goal. El-Solia blazed his shot over.

The game is something of a derby because the two countries are neighbors. But they are not close on recent achievements. Egypt is a record seven-time African Cup winner, while Sudan won the title in 1970 but has gone past the group stage just once in the 52 years since then.

There was a scare for Egypt — and Liverpool — when Salah went down clutching his leg after Sudan defender Mazin Mohamedein crunched into him with his studs raised in a tackle. Egypt’s captain got up and finished the game, though.

The two results on Wednesday also meant Cape Verde and Malawi qualified as the first two of four best third-place teams. It’s the first time Malawi has reached the knockouts at the African Cup.

The final two groups will be decided on Thursday, when Algeria, bottom of Group E, needs to win against Ivory Coast to avoid early elimination and a feeble defense of its title.

As for Ghana, the country’s Ministry of Sports has summoned the Ghana Football Association leadership for an emergency meeting on Friday over what it called the team’s “abysmal performance” at the African Cup.

Ghana, once a World Cup quarterfinalist, failed to win a game in Cameroon for its worst return in 59 years of playing at the African Cup.