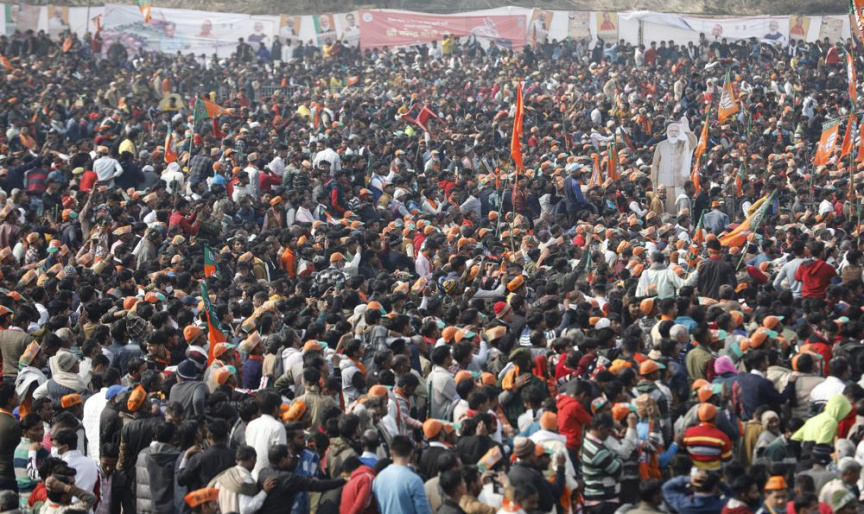 FILE - A crowd of supporters gather to listen to Indian Prime Minister Narendra Modi as he lays the foundation stone of Major Dhyan Chand Sports University in Meerut, Uttar Pradesh state on Jan. 2, 2022. Coronavirus cases fueled by the highly transmissible omicron variant have rocketed through India and the country is scrambling to ward off its impact by swiftly introducing a string of restrictions that the population thought were history. But India’s political leaders, including Modi, have largely flouted some of these guidelines and traversed cities in a massive campaign trail ahead of crucial state polls, addressing packed rallies of tens of thousands of people without masks. (AP Photo/Ra

NEW DELHI (AP) — Coronavirus cases fueled by the highly transmissible omicron variant are rocketing through India, prompting the federal government and states to swiftly reintroduce a string of restrictions.

Night curfews are back. Restaurants and bars are running at half their capacity. Some states have closed schools and movie theatres. Large gatherings are to be downsized.

But India’s political leaders are busy on the campaign trail ahead of crucial state polls, addressing packed rallies of tens of thousands of people, many without masks.

The scenes are strikingly similar to last year’s election season when the delta variant ravaged the country and made India one of the world’s worst-hit countries. Some political parties have begun to curtail their campaigns and halt a few rallies, but health experts worry that the lessons learned last year have already been forgotten.

“The highly transmissible omicron variant chases and catches you. But our politicians are out there to welcome it with a hug,” said Dr T. Jacob John, an Indian virologist. “I fear it is beginning to look a lot like last year.”

A devastating surge of infections tore through India last year. It was partly fed by large crowds at election rallies, where politicians, including Prime Minister Narendra Modi, often appeared without masks and addressed teeming crowds.

That surge left the country’s health system battered, with people begging for oxygen and hospital beds. Crematoriums ran out of space. Daily deaths crossed 4,000 during the peak of the crisis, with at least 200,000 people dying between March and May, a number widely believed to be a vast undercount.

Health officials say the new surge is causing fewer deaths and many cases are asymptomatic. But they warn against taking the omicron variant too lightly, and say that numerous cases, even if milder, could still pressure the country’s fragile health system.

Overall, new daily cases have increased nearly fourfold in the last week. Hospital admissions are rising and medical staff in some states have been asked to cut short their winter holidays.

On Saturday, the health ministry said more than 141,986 cases were reported in the previous 24 hours, nearly a 21% increase from the previous day.

“The transmission chains that started at the beginning of the year due to these rallies will take months to burn out,” John, the virologist, said.

Over the past few weeks, Modi has addressed huge gatherings in several cities, particularly in Uttar Pradesh, the country’s most populous state which is ruled by his Bharatiya Janata Party. The party’s political opponents have also hit the campaign trail, flouting health guidelines.

Earlier this week, the Congress party organized a marathon in which thousands of people ran without masks and were packed so tightly that they collapsed onto each other. The chief minister of New Delhi, Arvind Kejriwal, contracted the virus after he was seen maskless while leading political rallies in multiple states.

With health experts warning of rapid growth in infections, and data suggesting they are spreading faster than during the peak of last year’s surge, several political parties have started a course correction.

The Congress party said it is stopping political rallies in Uttar Pradesh and switching to virtual campaigning. A few other parties, including Modi’s, have followed suit. It’s unclear, however, whether they will cancel all future rallies.

The polls are scheduled to begin on Feb. 10 and end on March 7. Results will be declared on March 10.

On Wednesday, V.K. Paul, a doctor working with the government on its coronavirus response, said it was likely that “systems will be overwhelmed.” He said restricting political activities and rallies was a decision the Election Commission needed to make.

On Saturday, the Election Commission, which had so far deflected that call by saying political parties wanted the rallies to go forward, gave in to the mounting pressure.

The commission barred all physical rallies and roadshows for one week and said a decision to impose restrictions throughout the entire campaign will be only taken after a Jan. 15 review.

S.Y. Quraishi, a former head of the commission, said campaigning could be banned or restricted for the entire period if the commission wanted to do so.

“But they lack the will,” Quraishi said. “What’s the point in banning rallies after the virus has already spread through the entire country?”

John, the virologist, said officials in states with upcoming elections are being inconsistent by imposing curfews and restrictions on everyday gatherings but allowing large election rallies to be held.

“The government has once again sent out a message that politics is more important than health,” he said.