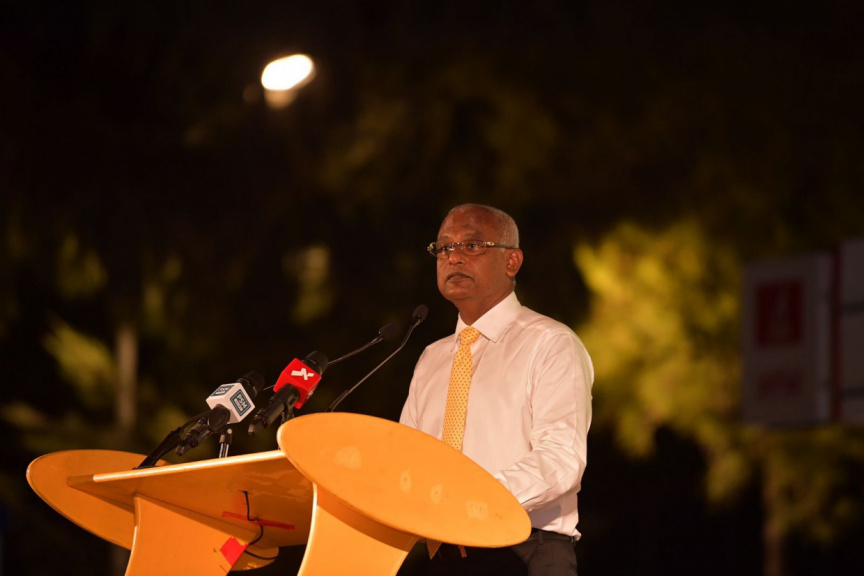 President Ibrahim Mohamed Solih has stated that work on linking the Sh. Komandoo with the inhabited island next to it, Mathi Komandhoo, will commence very soon.

President Solih said this whilst speaking at a ceremony held last night at Komandoo, to launch the campaign of Maldivian Democratic Party’s (MDP) candidate, Mohamed Rashid, in the Komadoo by-elections.

Noting that Komandoo is an island with a large population, President Solih said that upon the completion of the island’s land use plan, residents will be issued land plots from the reclaimed area on the island. He also noted that the development of housing units at Komandoo is included in the government’s housing plan.

“Nevertheless, this is not a solution for Komandoo residents as the island’s Council President has said. The solution for housing issues faced by the residents of Komandoo is to link the island with Mathi Komandoo. This is an electoral pledge we made. By god’s will, work on this will commence very soon,” he had said.

Highlighting the fact that some people are claiming work on linking the two islands was announced for campaign purposes – President Solih stressed that it will be seen to that the work commences and proceeds, despite the claims.

“There is no correlation between this and the campaign. This a work that needs to be completed at the earliest, at full speed. By god’s will, the plan has been devised. You all will witness the implementation here within the upcoming week or so,” he had said.

The Elections Commission announced that they will be holding by-elections for the Komandoo parliamentary seat on February 5, 2022.

The Komandoo seat was left vacant following the death of MP Hussain Waheed on December 14. He died at the age of 53 years in a hospital in Male’ City after a year-long battle with cancer.

At last night’s ceremony, President Solih described late Hussain Waheed as an individual who has played a pivotal role in the development works of Komandoo.

“I lost a very close friend. A well-wishing, honest person. As we have said previously, the constituency lost a diligent server,” he added.

In addition to MDP's Rashid, candidates from the Progressive Party of Maldives (PPM) and Maldives National Party (MNP) are also contesting in the by-election. Former Deputy Home Minister Moosa Fathuhy Adam is contesting on PPM's ticket – Abdul Hannaan Idrees, who has long served in the field of education, is contesting on MNP's ticket.