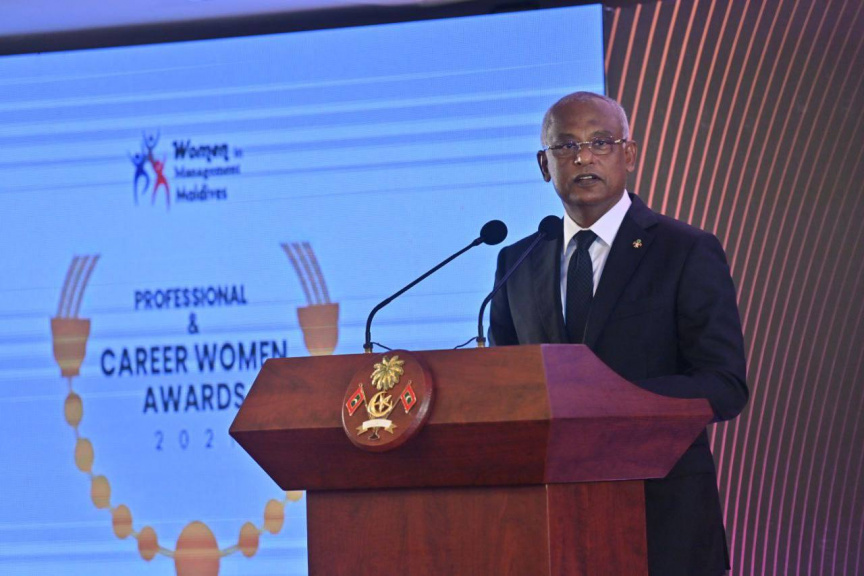 During the function, both President and First Lady presented this year’s Professional and Career Women Awards to recipients.

While addressing the gathering, President Solih stated that his administration’s Gender Equality Action Plan, which is a part of the “National Resilience and Recovery Plan (NRR) 2020-2022 intends to ensure “gender equality by increasing women’s ability to participate equally in all state and national-level engagements and promoting the economic empowerment of women.”

He went on to state that due to the COVID-19 pandemic, the implementation of the administration’s Strategic Action Plan (SAP) was delayed. Hence, he noted that they reprioritized it into the two-year NRR, inclusive of the top priority deliverables.

As per the President, the delivery of the Gender Equality Action Plan would “ensure equality between men and women in leadership, economic activities, justice, and social well-being.”

Highlighting that abolishing inequalities and ensuring equal opportunities for women on the political and social fronts were important pledges of his administration, President Solih noted that they made significant progress in this regard during the past two years. He further spoke about the importance of embracing the voices, opinions and sight of women in decision making.

The Professional and Career Women Awards was launched in March 2018 by Women in Management (WIM), and has been hosted annually.