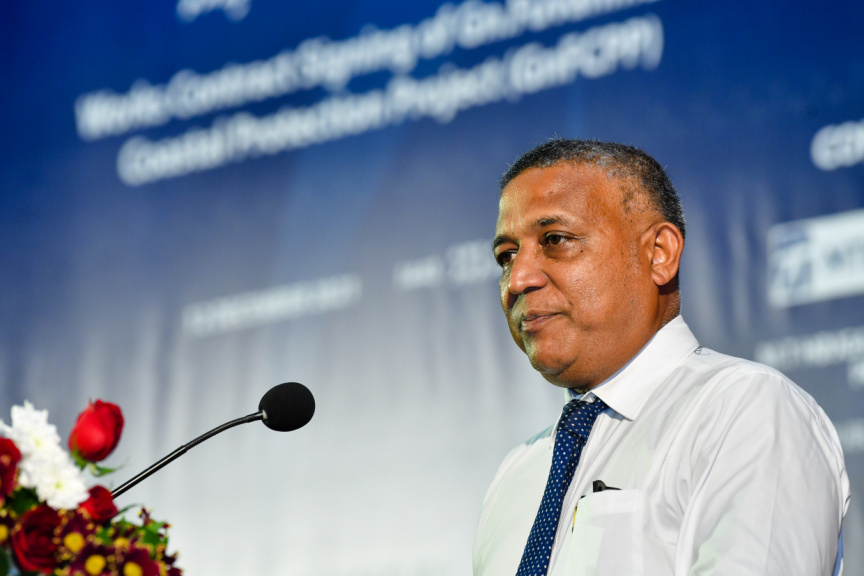 Speaking at a ceremony held last night at Fuvahmulah City to inaugurate the coastal protection project at the city – Minister Aslam said that political status of a country is deeply considered when European countries provide grant assistance or when they invest in a country.

Minister Aslam said that he had noticed this during a meeting held with the Ambassador of Netherlands to the Maldives Tanya Gonggrijp prior to last night’s ceremony.

“European countries especially takes into a consideration a lot of matters when carrying out such major-scaled projects. They include whether the investment being made or the grant assistance being provided is utilized in a way that it best benefits public. It should also be beneficial to the environment. In some cases, they strongly consider the political status of a country too,” he had said.

On this note, Minister Aslam alleged that one of the reasons why the coastal protection project at Fuvahmulah City was delayed was due to the political unrest observed in the Maldives starting from 2012 – whereas events that had unfolded during this period had been of the kind that is unacceptable to the European countries.

He added that he understood back then, how such events would be detrimental to the Maldivian people.

“This is one of the reasons it took about 10 years for this. We should think about how these kind of events would impact us in the future,” he had said.

Speaking further, Minister Aslam stressed on the importance of governing the Maldives under a democratic system – adding that the process of receiving grant assistance from foreign countries will be much faster this way.

“Maldives has now been omitted from the list of poorest countries. We are now on the list of developing countries. This can only be interpreted as how far we have reached in our developmental journey. But, this is not the end point. Until we come a developed country, we will carry out projects in the islands for more years to come,” he had said.

Police search for two individuals who stole from a shop