Yameen: Never touched State’s funds; I cannot be touched a next time as well 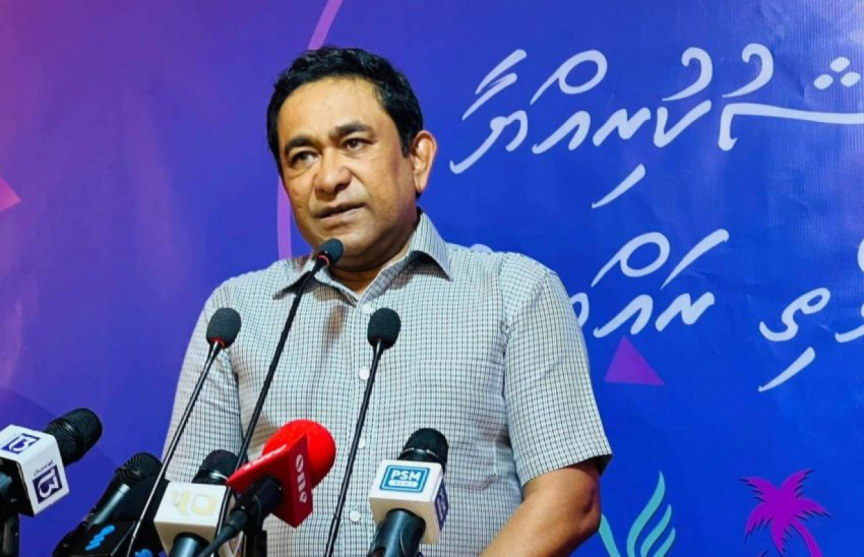 Former President Abdulla Yameen Abdul Gayyoom has stated that he has never touched the State’s funds– adding that he “cannot be touched” in any corruption cases raised against him pertaining to State’s funds.

Yameen spoke at an event held at PPM’s headquarter, ‘Thank you, citizens’, tonight. This is the first time he has addressed the public in front of a podium since his money laundering conviction was squashed by the Supreme Court, and subsequently, freed from a five-year prison term. Whilst speaking tonight, Yameen reiterated that he is not someone who would betray the State.

“Even tonight I am saying, just as I have said before years ago at this podium. If a rightful trial is conducted on the grounds of stealing from State’s funds, or touching State’s funds – and is reviewed justly, there will be no room to touch me,” he had said.

Yameen also raised questions as to the extent justice and fairness exists in the country. On this note, he stressed that what is the most important is to improve the issues in the justice system that needs to be improved.

“Today we have to question, what is still the limpest in this country. The limpest is the justice system. Should talk with courage. If talking about this means getting thrown into jail, then do it again. But we cannot stay relaxed and move forward until the citizens completely believe that the justice system is isolated from all kinds of undue influence,” he had said.

Speaking further, Yameen thanked all persons who had worked to free him since day one. He also said that opposition activities will be much stronger starting from now on – describing the coalition activities as that of “national work”.

“All the people prayed to Allah that I be freed from jail, without getting tired, bored or losing hope and thinking this cannot be done. The result of this, we can see politically,” he had said.

Whilst the opposition coalition held an event tonight, they are also scheduled to have a grand event on Friday night at the Carnival area – which Yameen is set to make an appearance at.

Speaking at a press conference held today, Male’ City Council’s Hulhumale’ constituency Councilor Ibrahim Shujau said that Yameen will be addressing the Maldivian people at this event, which is titled ‘Welcome President Yameen’.

Yameen was found guilty of money laundering by the Criminal Court on November 28, 2019.  He was sentenced to five years in prison and fined USD 5 million. Yameen promptly appealed the conviction with the High Court, which sided against him and ruled to uphold the original sentence back in January.

The case was heard at the Supreme Court by a three-member bench, composed of Justice Mahaz Ali Zahir – who headed the bench, and Justice Dr. Azmiralda Zahir and Justice Dr. Mohamed Ibrahim.

The Supreme Court ruled to overturn High Court’s decision to uphold the original sentence on Tuesday.

Man who urinated inside mosques jailed for 1M, 19 days