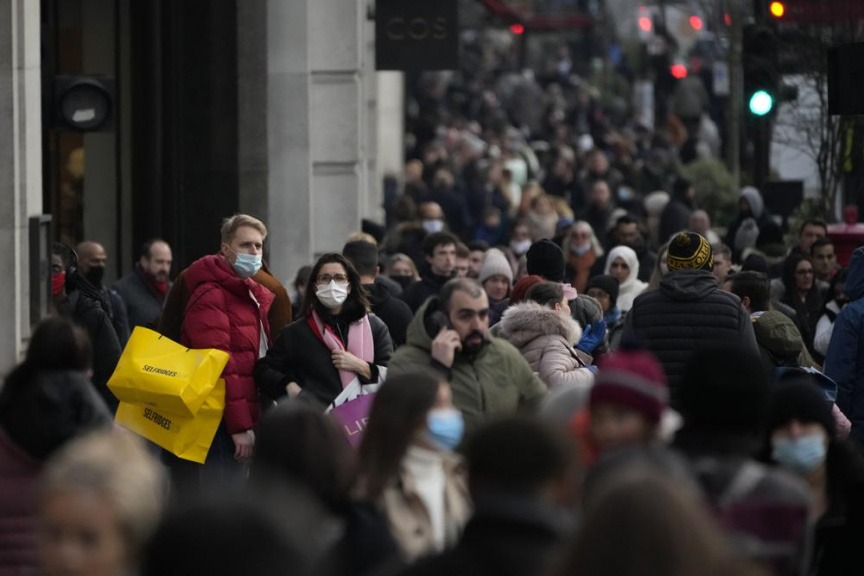 GENEVA (AP) — The World Health Organization warned Monday that the global risk from the omicron variant is “very high” based on the early evidence, saying the mutated coronavirus could lead to surges with “severe consequences.”

The assessment from the U.N. health agency, contained in a technical paper issued to member states, amounted to WHO’s strongest, most explicit warning yet about the new version that was first identified days ago by researchers in South Africa.

It came as a widening circle of countries around the world reported cases of the variant and moved to slam their doors in an act-now-ask-questions-later approach while scientists race to figure out just how dangerous the mutant version might be.

Japan announced it is barring entry to all foreign visitors, joining Israel in doing so. Morocco banned all incoming flights. Other countries, including the U.S. and members of the European Union, have moved to prohibit travelers arriving from southern Africa.

WHO said there are “considerable uncertainties” about the omicron variant. But it said preliminary evidence raises the possibility that the variant has mutations that could help it both evade an immune-system response and boost its ability to spread from one person to another.

“Depending on these characteristics, there could be future surges of COVID-19, which could have severe consequences, depending on a number of factors, including where surges may take place,” it added. “The overall global risk ... is assessed as very high.”

The WHO stressed that while scientists are hunting evidence to better understand this variant, countries should accelerate vaccinations as quickly as possible.

While no deaths linked to omicron have been reported so far, little is known for certain about the variant, including whether it is more contagious, more likely to cause serious illness or more able to evade vaccines. Last week, a WHO advisory panel said it might be more likely to re-infect people who have already had a bout with COVID-19.

Scientists have long warned that the virus will keep finding new ways to exploit weaknesses in the world’s vaccination drive, and its discovery in Africa occurred in a continent where under 7% of the population is vaccinated.

“The emergence of the omicron variant has fulfilled, in a precise way, the predictions of the scientists who warned that the elevated transmission of the virus in areas with limited access to vaccine would speed its evolution,” said Dr. Richard Hatchett, head of CEPI, one of the founders of the U.N.-backed global vaccine sharing initiative COVAX.

Spain on Monday became one of the latest countries to report its first confirmed omicron case, detected in a traveler who returned Sunday from South Africa after making a stopover in Amsterdam.

While the majority of omicron infections recorded around the world have been in travelers arriving from abroad, cases in Portugal and Scotland have raised fears that the variant may already be spreading locally.

“Many of us might think we are done with COVID-19. It’s not done with us,” warned Tedros Adhanom Ghebreyesus, WHO’s director-general.

Days after the variant sent a shudder through the financial world nearly two years into the pandemic that has killed over 5 million people, markets had a mixed reaction Monday. European stocks rebounded and Wall Street steadied itself, while Asian markets fell further.

U.S. President Joe Biden called the omicron variant a cause for concern but “not a cause for panic.” He said he is not considering any widespread U.S. lockdown and instead urged mask-wearing and vaccinations, even as a federal judge blocked his administration from enforcing a requirement that thousands of health care workers in 10 states get the shot.

Dr. Rochelle Walensky, director of the U.S. Centers for Disease Control and Prevention, reacted to the potential threat by urging everyone 18 and older to get booster shots, because “strong immunity will likely prevent serious illness.” Earlier this month, the U.S. opened boosters to all adults but recommended them only for those 50 and older or people in long-term care.

The omicron infections have underscored the difficulty in keeping the virus in check in a globalized world of jet travel and open borders. Yet many countries are trying to do just that, against the urging of the WHO, which noted that border closings often have limited effect and can wreak havoc on lives and livelihoods.

Some have argued that such restrictions can buy valuable time to analyze the new variant.

While the initial global response to COVID-19 was criticized as slow and haphazard, the reaction to the omicron variant came quickly.

Late last week, von der Leyen successfully pushed the 27-nation EU to agree to ban flights from seven southern African nations, similar to what many other countries are doing.

Cases have been reported in such places as Canada, Germany, Britain, Belgium, Denmark, the Netherlands and Portugal, where authorities identified 13 omicron infections among members of the Belenenses professional soccer team.

Taking no chances, Japan, which has yet to detect any omicron cases, reimposed border controls that it had eased earlier this month.

“We are taking the step as an emergency precaution to prevent a worst-case scenario in Japan,” Prime Minister Fumio Kishida said.

Israel likewise decided to bar entry to foreigners, and Morocco said it would suspend all incoming flights for two weeks.

Britain reacted by expanding its COVID-19 booster program to everyone 18 and older, making millions more people eligible. Up until now, booster shots were available only to those 40 and over and people particularly vulnerable to the virus. The U.K. has reported about a dozen omicron cases.

Despite the global worry, doctors in South Africa are reporting patients are suffering mostly mild symptoms so far. But they warn that it is early. Also, most of the new cases are in people in their 20s and 30s, who generally do not get as sick from COVID-19 as older patients.