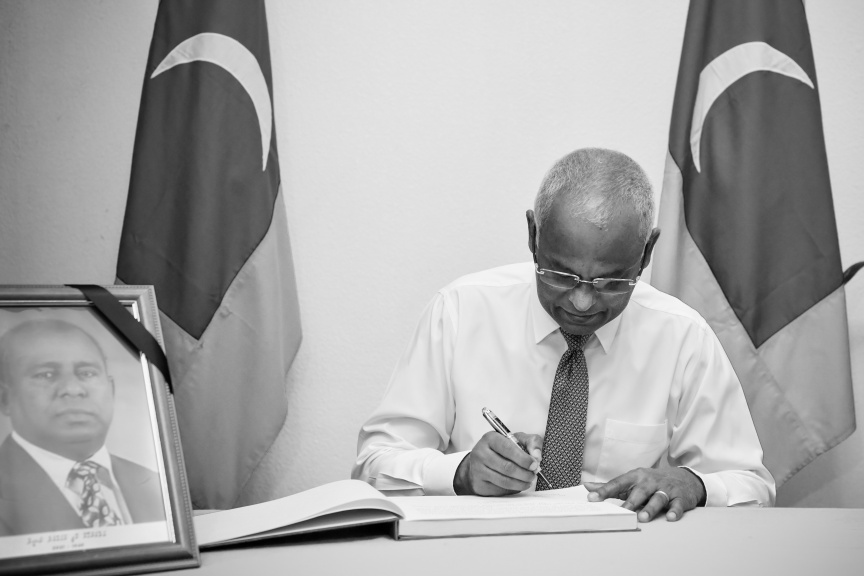 Rasheed, acclaimed for his contributions to Dhivehi literature, particularly to Dhivehi poetry, died at the age of 72 years last week.

President Solih signed the book of condolences in a visit to the Dhivehi Bahuge Academy on Tuesday morning.

He wrote that the passing of Rasheed was a huge loss to Dhivehi linguistics, noting that he was a very skilled writer who left his legacy in Dhivehi language.

He concluded his statement by expressing his deepest condolences to Rasheed’s family.

President Solih, after he signed the book of condolences, met with the staff at the Dhivehi Bahuge Academy.

Tuesday’s visit marked his first visit to the Dhivehi Bahuge Academy in its history.

Speaking to the staff, President Solih spoke of the importance of the work undertaken by the Dhivehi Bahuge Academy and thanked them for their service.

The Dhivehi Bahuge Academy opened the book of condolences in Rasheed’s memory last Sunday. The book can be signed between 09:00-13:30 hours on working days.

Rasheed died on Thursday, November 11, while under treatment at the ADK Hospital in Male’ after suffering a stroke.

Rasheed began his service to the field of Dhivehi language and literature at the age of 18 years. He received the National Award of Honor for his contributions to the field in 2020.

It had followed the National Award of Recognition for his contributions to the field of Dhivehi poetry in 2005, and the Lifetime Achievement Award for his services to the field of journalism by the Maldives Media Council in 2018.

Rasheed, in addition to being an acclaimed writer and poet, had also been an educator. He worked as a Dhivehi language teacher in multiple schools in the capital.

He has also been renowned for his calligraphy skills. He received the National Award for Public Service in the field of Dhivehi and Arabic calligraphy in 1988.

Parliament consideration to be sought to join OACPS