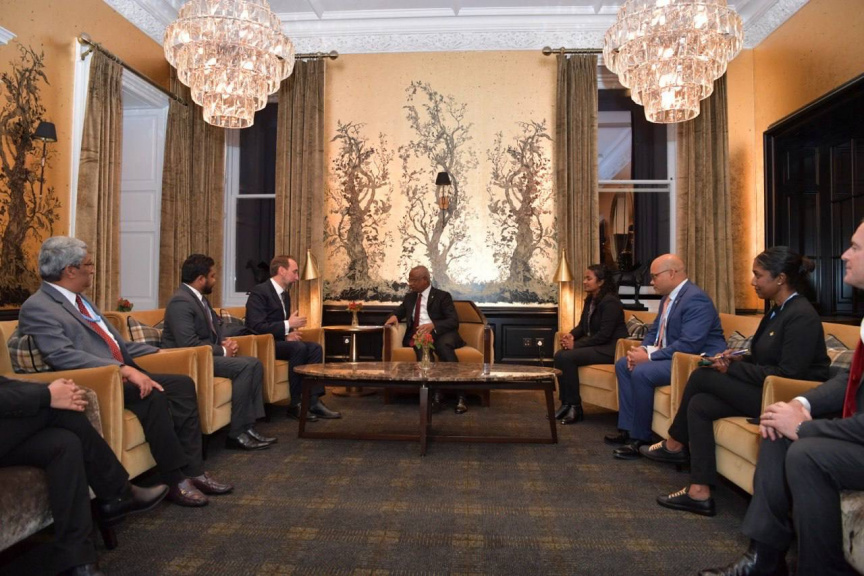 He met with Zeid after his appointment as an advisor to Maldives’ COP26 delegation.

During the meeting, President Solih expressed appreciation to Zeid for his previous assistance to Maldives in his capacity as UN High Commissioner for Human Rights and expressed gratitude for the new partnership that they are embarking on.

He said that COP26 is therefore a significant summit for Maldives.

Meanwhile, Zeid said that he was delight at the opportunity to support Maldives, describing it as a privilege to join the Maldives delegation.

They said that access to finance was one of the biggest challenges faced by small island states such as the Maldives, which are in dire need of extra assistance for building resilience and adapting to climate change.

Further discussion was held on Maldives' focus at COP26.

President Solih said that the Maldives delegation was honored to have him advise them on climate change and expressed hope that the partnership would add great value to the efforts with his vast experience in the global community.

Zeid is President and Chief Executive Officer (CEO) of the International Peace Institute (IPI). Perry World House Professor of the Practice of Law and Human Rights at the University of Pennsylvania, and a member of the Elders, a group founded by Nelson Mandela.

Previously, Prince Zeid served as the UN’s High Commissioner for Human Rights from 2014 to 2018 after a long career as a Jordanian diplomat, including as his country’s Permanent Representative to the UN (2000-2007 and 2010-2014) and Ambassador to the United States (2007-2010). He served on the UN Security Council, was a configuration chair for the UN Peace-Building Commission, and began his career as a UN Peacekeeper in the former Yugoslavia.

COP26, hosted by the UK from October 31 to November 12, brings together parties in a bid to accelerate action towards the goals of the Paris Agreement and the UN Framework Convention on Climate Change.