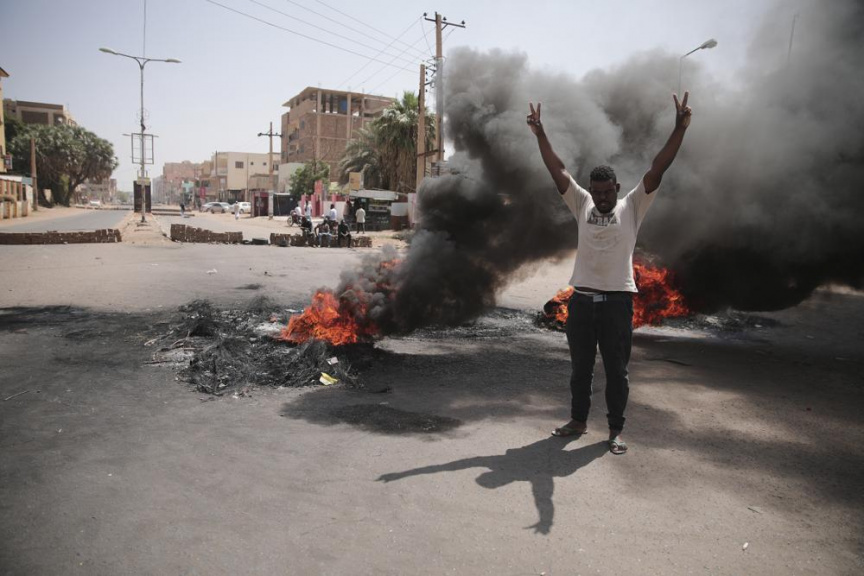 CAIRO (AP) — Sudan’s deposed prime minister and his wife were allowed to return home Tuesday, a day after they were detained when the military seized power in a coup, according to a statement issued by his office.

The release of Prime Minister Abdallah Hamdok and his wife followed international condemnation of the coup and calls for the military to release all the government officials who were detained when Gen. Abdel-Fattah Burhan seized power on Monday.

The statement by Hamdok’s office said other government officials remained in detention, their locations unknown. The deposed prime minister and his wife were under “heavy security” at home in the upscale Kafouri neighborhood of the capital Khartoum, said a military official, speaking on condition of anonymity because he was not authorized to brief the media. The official did not say whether they were free to leave or make calls.

Earlier in the day, Burhan said Hamdok had been held for his own safety and would be released. But he warned that other members of the dissolved government could face trial as protests against the putsch continued in the streets.

The military seized power in a move that was widely denounced abroad. On Tuesday, pro-democracy demonstrators blocked roads in the capital with makeshift barricades and burning tires. Troops fired on crowds a day earlier, killing four protesters, according to doctors.

In his second public appearance since seizing power, Burhan said the military was forced to step in to resolve a growing political crisis.

“There were people who were talking about discriminating against others, and that was driving this country to reach a civil war that would lead to the fragmentation of this country, tearing apart its unity, its fabric and society. These dangers were in front of us,” Burhan told a televised news conference.

But the coup came less than a month before Burhan was supposed to hand the leadership of the Sovereign Council that runs the country to a civilian — a step that would have decreased the military’s hold on power.

“The whole country was deadlocked due to political rivalries,” Burhan said. “The experience during the past two years has proven that the participation of political forces in the transitional period is flawed and stirs up strife.”

Hamdok had been held at Burhan’s home, the general said, and was in good health. But of the many other senior government officials detained Monday, Burhan alleged that some tried to incite a rebellion within the armed forces, saying they would face trial. Others who are found “innocent” would be freed, he added.

The takeover came after weeks of mounting tensions between military and civilian leaders over the course and pace of Sudan’s transition to democracy. It threatened to derail that process, which has progressed in fits and starts since the overthrow of longtime autocrat Omar al-Bashir in a popular uprising two years ago.

At an emergency meeting of the U.N. Security Council on Tuesday, U.N. Secretary-General Antonio Guterres urged world powers to unite to confront a recent “epidemic of coups d’état.” But the U.N.’s most powerful body took no action during the closed-door consultations about Sudan, a nation in Africa linked by language and culture to the Arab world.

Hamdok’s office had voiced concern for his safety and for the other detained officials. In a statement, the office accused military leaders of acting in concert with Islamists, who have argued for a military government, and other politicians linked to the now-dissolved National Congress Party, which dominated Sudan during al-Bashir’s Islamist-backed rule.

U.S. President Joe Biden’s administration announced the halt of $700 million in emergency assistance to Sudan and said Tuesday it was looking at sending stronger signals to the generals.

“They should first and foremost cease any violence against innocent civilians, and ... they should release those who have been detained and they should get back on a democratic path,” said Jake Sullivan, the administration’s national security adviser.

Secretary of State Antony Blinken reported that he spoke with Hamdok on Tuesday, the first high-level contact the U.S. has had with Sudan since the coup and the suspension of in U.S. aid. Blinken welcomed Hamdok’s release and emphasized that the U.S. supports a civilian-led transition to democracy in Sudan, a State Department statement said.

Mariam al-Mahdi, the foreign minister in the dissolved government, declared Tuesday that she and other members of Hamdok’s administration remained the legitimate authority in Sudan.

“We are still in our positions. We reject such coup and such unconstitutional measures,” she told The Associated Press by phone from her home in Khartoum. “We will continue our peaceful disobedience and resistance.”

The Ministry of Culture and Information, still loyal to the deposed government, said in a Facebook post that Sudanese ambassadors in Belgium, Switzerland and France have defected.

Nureldin Satti, the Sudanese envoy to the U.S., said he was working with those diplomats to “resist the military coup in support of the heroic struggle of the Sudanese people” to achieve the aims of the uprising against al-Bashir. But he did not specify whether he, too, had defected.

Al-Mahdi, meanwhile, spoke to the wife of one of the officials detained, Minister of Cabinet Affairs Khalid Omar, and said he was humiliated and mistreated during his arrest.

Hours after the arrests, Sudanese flooded the streets of Khartoum and other cities in protest. At least four people were killed and over 80 wounded when security forces opened fire, according to the Sudan Doctors’ Committee. Human Rights Watch said forces used live ammunition against the demonstrators.

Sudan saw a bloody crackdown on pro-democracy protests in 2019, and there were fears about whether there would be another crackdown. A bigger test of how the military will respond to the resistance could come Saturday when protesters plan a mass march to demand a return to civilian rule.

The Sudanese Professionals’ Association, a group of unions that was behind the uprising against al-Bashir, also urged people to go on strike and engage in civil disobedience. Separately, the Sudan Popular Liberation Movement–North, the country’s main rebel group, denounced the coup and called for people to take to the streets.

In a sign of the divisions among the civilian leaders in Sudan, a group known as the Justice and Equality Movement blamed the deposed government for the military takeover. It said a few officials had monopolized decision-making and refused to engage in dialogue.

The group, headed by Finance Minister Gibreil Ibrahim, is the first to publicly voice support for the military but also urged it to end the state of emergency, release the detainees and appoint a civilian government to run day-to-day activities. Earlier this month, the group had taken part in a pro-military sit-in in Khartoum.

Another pro-military group that splintered from the protest movement that ousted al-Bashir also welcomed the takeover, saying it would end a sit-in it had organized outside the presidential palace to support the generals earlier this month.

The military has sent mixed signals about Sudan’s future. Burhan promised to gradually restore internet and communications services that were disrupted in the coup. But the Civil Aviation Authority said it was suspending all flights to and from Khartoum’s airport until Oct. 30.

Following the coup, Burhan now heads a military council that he said would rule Sudan until elections in July 2023.