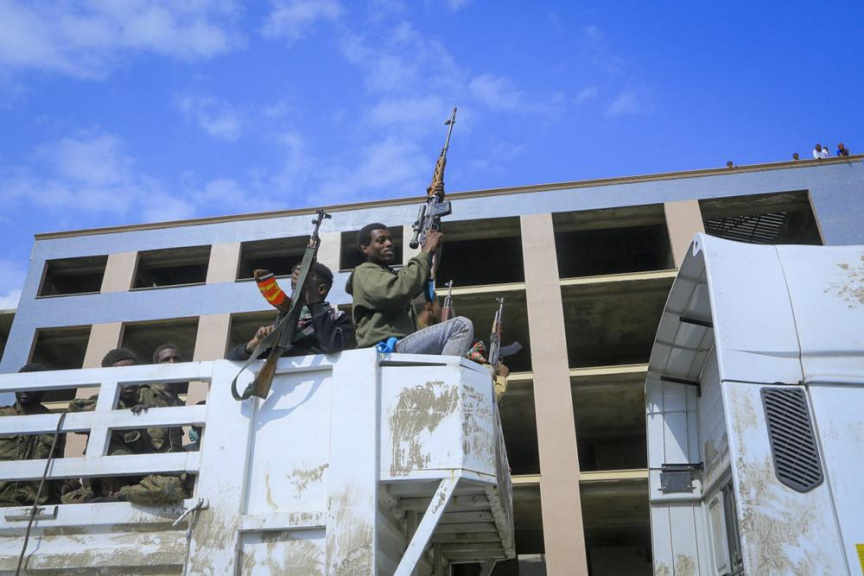 Armed Tigray forces, center, accompany captured Ethiopian government soldiers and allied militia members as they are paraded through the streets in open-top trucks, as are taken to a detention center in Mekele, the capital of the Tigray region of northern Ethiopia Friday, Oct. 22, 2021. (AP Photo)

NAIROBI, Kenya (AP) — Ethiopia’s prime minister has called on citizens to redouble their efforts to combat the rival Tigray forces who claim to have seized key cities on a major highway leading to the capital, while a new wave of detentions of ethnic Tigrayans has begun.

A move on the Ethiopian capital of Addis Ababa is a new phase in the war that has killed thousands of people since fighting broke out a year ago between Ethiopian and allied forces and Tigray ones who long dominated the national government before Prime Minister Abiy Ahmed took office in 2018.

The prime minister’s spokeswoman, Billene Seyoum, told The Associated Press on Monday that Abiy “is where he’s meant to be, leading the country’s front and center.”

Abiy said Sunday said that federal troops are fighting on four fronts against the Tigray forces and “we should know that our enemy’s main strength is our weakness and unpreparedness.” Amid calls on social media for attacks against ethnic Tigrayans, he said “we should closely follow those who work for the enemy and live amongst us.”

A new roundup of Tigrayans was seen in the capital on Monday. Government spokesman Legesse Tulu said “those who believe the government is now weakening and (Tigray forces are) coming should be careful. Some even went to nightclubs to celebrate. The government is taking actions against those.”

The Tigray forces over the weekend claimed to control the key cities of Dessie and Kombolcha, though the federal government disputed it, and Legesse asserted that the Tigray forces killed more than 100 youths in Kombolcha overnight.

The United States has said it is “alarmed” by the reports of Tigray forces taking the cities.

The Tigray forces also told the AP they were poised to physically link up with another armed group, the Oromo Liberation Army, with which it struck an alliance earlier this year.

The fighting could reach the Oromo region that neighbors Addis Ababa. Ethnic Oromo once hailed Abiy as the country’s first Oromo prime minister, but discontent has since emerged with the jailing of outspoken Oromo leaders.

A top general with the Tigray forces, Tsadkan Gebretensae, told Tigrai TV over the weekend they were ruling out talks with the federal government.

The Tigray forces say they are pressuring Ethiopia’s government to lift a months-long blockade on their region of around 6 million people, with basic services cut off and humanitarian food and medical aid denied. The humanitarian crisis has spread as the fighters have moved into the neighboring Amhara and Afar regions after retaking much of their region in June.

In Addis Ababa, there was low-level concern. “It is unthinkable that they will come to Addis. It will never happen,” said resident Hamelmal Alemu, who believed the Tigray forces would be defeated before then.

“Even if they come here, they won’t kill all the people, because otherwise they won’t have anyone to govern,” said another resident, Desta Tadesse.

A third resident, who spoke on condition of anonymity out of concern about retaliation, worried that state media were not fully reporting events. He said he was Amhara and he believed that if the Tigray forces come, they will kill him.

The government of Amhara on Sunday ordered government institutions to stop regular activities and join the war effort.