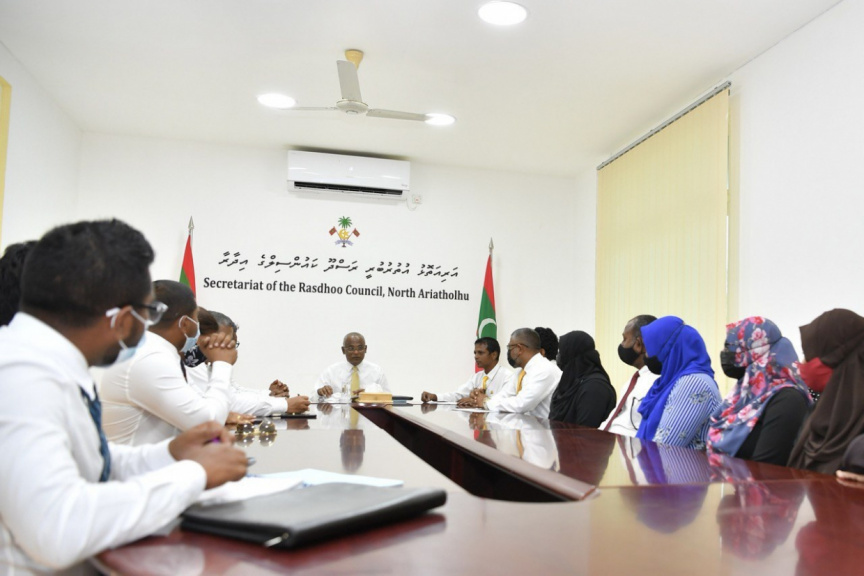 President Ibrahim Mohamed Solih has affirmed his government’s commitment to complete all development projects initiated as per his electoral pledges – within the next two years.

President Solih had said this during a meeting held with AA. Rasdhoo Council and the Women’s Development Committee (WDC) on Wednesday – as part of his visit to six islands in Alifu Alifu Atoll.

In kicking off the meeting – the Council and WDC thanked President Solih for the close personal attention he pays to residents' interests by traveling to the island to listen to their concerns.

On this note – Councilors outlined the most pertinent needs and difficulties faced by Rasdhoo residents which included housing scarcity faced due to lack of land, upgrades required in healthcare, difficulties in using utilities and concerns regarding the delay in the completion of ongoing projects on the island.

Councilors also highlighted issues such as damage to the seawall, the need for increasing the number of sports facilities and improving the working engagement between the Council and government agencies.

WDC members stressed that they require technical expertise and training to more efficiently conduct their programs.

In responding to these concerns raised – President Solih briefed the Councilors and WDC members on the latest updates on the planned and ongoing projects for Rasdhoo. On this note, he said that the housing program included in next year’s budget will temporarily solve the housing problem on the islands – adding that a long-term plan would also be devised for a permanent solution.

President Solih also affirmed that all developmental projects initiated on the island as per his electoral pledges – would be completed within the next two years.

During the meeting – President Solih had also assured that he would work alongside the Local Government Authority to offer WDC the technical training they require.

Rasdhoo was the second destination in President Solih’s ongoing tour of Alifu Alifu Atoll. He is accompanied by a delegation of cabinet ministers and senior government officials during this trip.