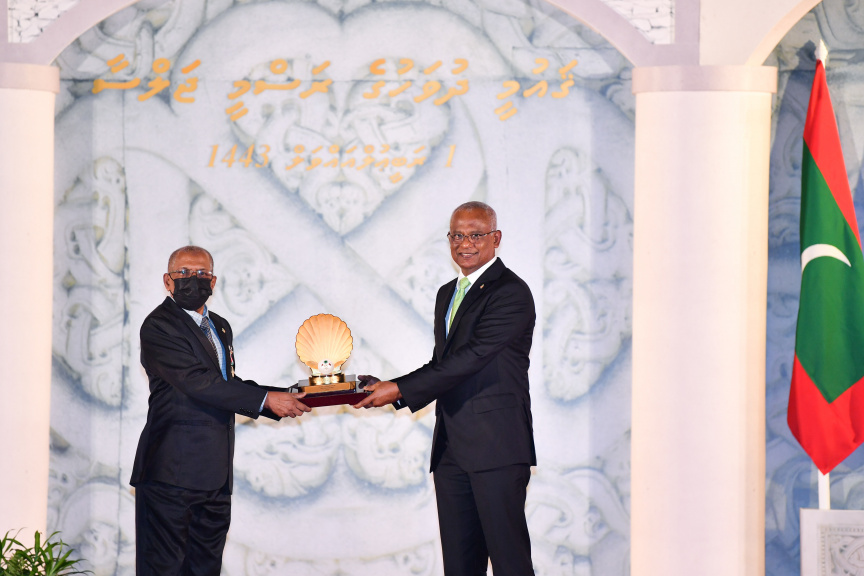 Recipients were presented their awards by President Ibrahim Mohamed Solih at the special ceremony held at Republic Square tonight to mark this year’s National Day. The recipients were selected by the National Awards Committee – constituted by the President for the task.

The National Award of Honor was presented to four individuals specializing in four different areas – one of which was awarded posthumously. They are:

The National Award of Recognition was conferred to 13 individuals and one organization this year. They are:

In tonight’s ceremony, the National Award for Special Achievement and Special Medal for Memorizing the Holy Quran was also presented.

Individuals awarded for achieving the highest-ranking position in a higher academic course at MQA rank 7, 8 or 9:

In addition to these ten individuals – Al-Qari Ahmed Rasheed Abdul Qadir was also awarded the National Award for Special Achievement in recognition of his outstanding performance in innovating an internationally recognized software for Dhivehi Braille to a standard recognized by the government for improving literacy amongst the blind.

The special medal for committing the Holy Quran to memory at the highest level was presented to 11 individuals this year. They are:

Speaking at the ceremony – President Solih congratulated all the recipients of the National Awards and Special Medals.