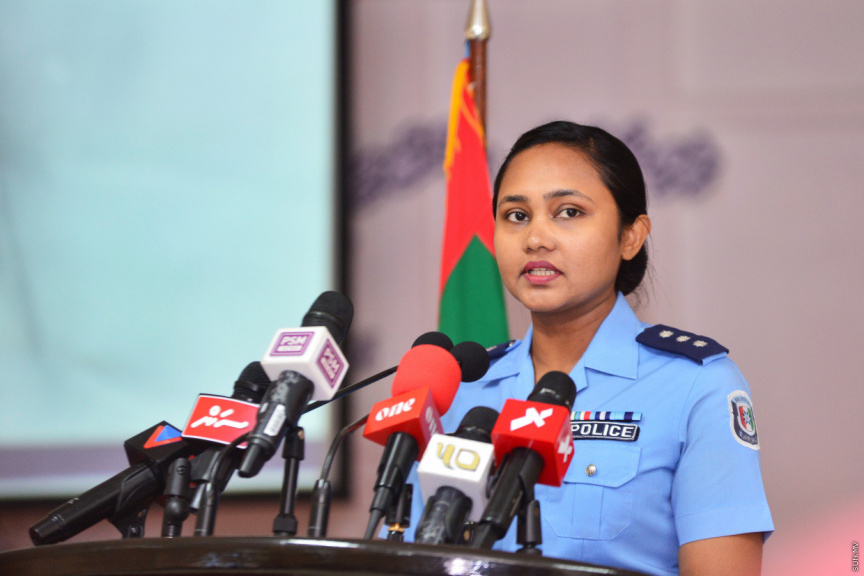 Superintendent of Police, former Spokesperson of Maldives Police Service Izmia Zahir has raised concerns, targeting criticism towards a member of the Police Board.

Sun has received a screenshot of text messages sent to a Viber group by Izmia concerning the member of the Police Board.

In the text messages, Izmia said that the member in question appointed to the Police Board which is tasked with quality assurance of services provided by the police as well a deciding whether commissioned officers are capable of undertaking their duties – is an individual who has been removed from a post following abuse of power and sexual misconduct. She further stated that it is hard to accept the fact that police officers must be answerable to such a person.

Izmia further stated that the placement of the member in question in the Police Board puts female employees and female detainees at risk – adding that she was concerned for their safety.

However, Izmia noted that she has full confidence in Police Board Member Aishath Noora Mohamed. She also added that she is unable to say anything with respect to the remaining female member on the Police Board – but she hoped that the member would always make the right choice.

The second female member on the Police Board is Safa Shareef, a lawyer. She has previously worked as part of Parliament Speaker, former President Mohamed Nasheed’s legal team.

When asked for comment regarding Izmia’s text messages on multiple instances, the Police had refused to make a statement.

Izmia’s comments come after notice of termination have been sent to Mohamed Jamsheed and Ahmed Mohamed – both of whom were appointed Assistant Commissioner of Police during former President Abdulla Yameen Abdul Gayoom’s administration.

As per information received to Sun, their termination was recommended by the Police Board.

The Police Board was constituted by President Ibrahim Mohamed Solih in April, after the Police Service Act, which was ratified in December last year, took effect in March.

The board has the authority to decide whether commissioned officers ranked higher than Superintendent of Police, with the exception of Commissioner of Police, accused of or reported for excessive use of force, inhumane acts or corruption are capable of undertaking their duties.

Faiz as president of Police Board, Fayaz as vice