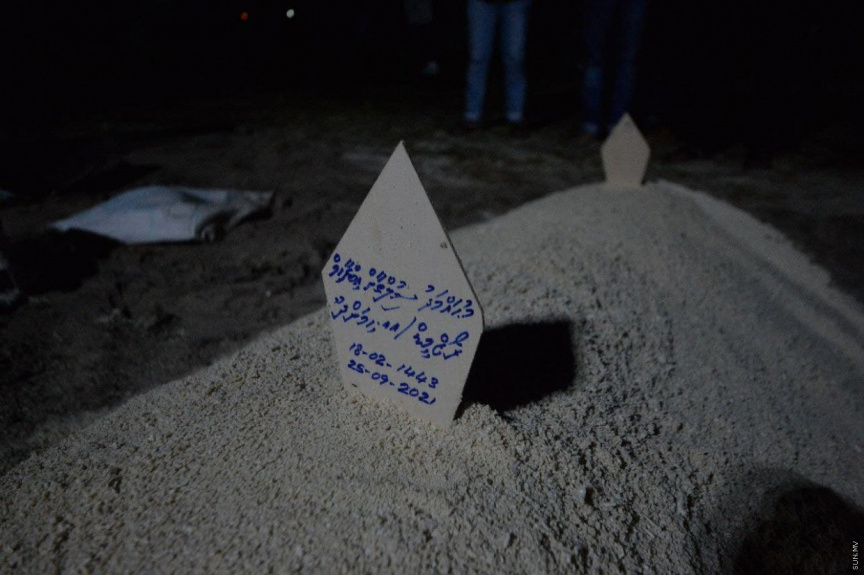 The body of Lance Corporal Mohamed Sultan, 22, is laid to rest at the Aasahara Cemetery in Male' City on September 27, 2021. (Sun Photo/Fayaz Moosa)

The silence at the Aasahara Cemetery was broken with the sound of sobs on Monday evening, as Lance Corporal Mohamed Sultan Ibrahim, 22, who died during training in India last weekend, was laid to rest.

Brave soldiers prepared to defend the nation had their heads bowed in grief inside the cemetery.

A long queue stretched outside the funeral home. They were his family. His friends. His teachers. Fellow soldiers. Soldiers who trained him. And soldiers he himself taught.

His mother stood inside the funeral home with tears streaming out of her eyes as she gently caressed her son’s hand. Two female soldiers flanked her, offering words of comfort.

Sultan’s funeral prayer was held after Maghrib. People formed lines for prayer long before the call to prayer. The lines stretched out to the street outside the cemetery, where people stood out in the rain.

The funeral prayer was led by al-Sheikh Ibrahim Fareed, who spoke a few words before beginning the prayer.

“I have been told that this brother performed all his obligatory prayers without fail. That he was good to people. He was kindhearted,” said Fareed.

She lowered herself beside the coffin and touched it one last time. And then got back up and went back inside.

She began weeping as four soldiers made a slow march towards the burial site. Sultan’s body was buried with military honors.

Those in attendance at the funeral each threw three fistfuls of soil on his coffin as they said their last goodbyes.

Fareed counselled them. He turned to the direction of the qibla said a prayer asking God to forgive Sultan’s sins.

Sultan had dreamed of being a soldier since he was a young boy. He died a national hero. A proud son of Maldives. The entire nation mourns his loss.