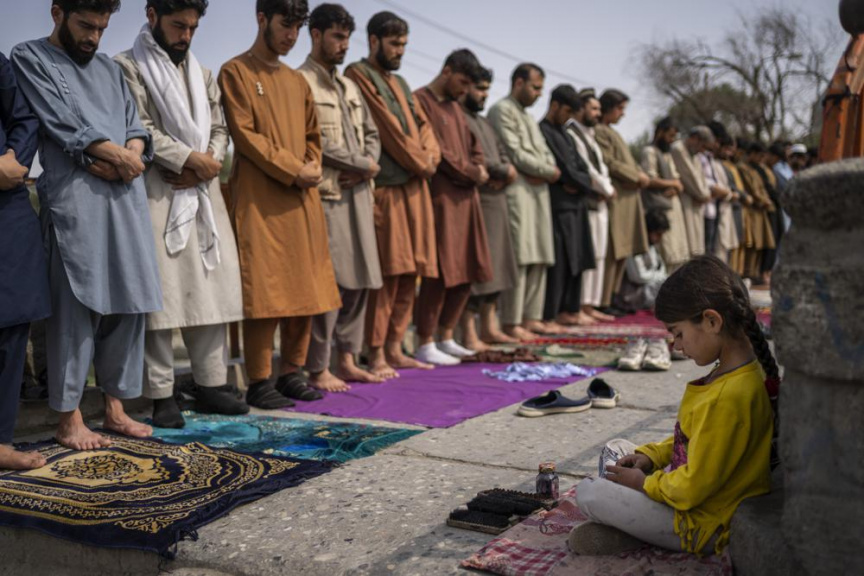 An Afghan girl working as a shoe cleaner sits in the street while men pray during Friday prayers in Kabul, Afghanistan, Friday, Sept. 24, 2021. (AP Photo/Bernat Armangue)

DUBAI, United Arab Emirates (AP) — Aid to Afghanistan should be made conditional to ensure the protection of women’s rights and access to education under the rule of the Taliban government, a panel of high-level speakers said at the United Nations on Friday.

The United Nations says 4.2 million children are not enrolled in school in Afghanistan, and 60% of them girls.

The Taliban have also said female university students will face restrictions, such as a compulsory dress code, and will not be allowed in the same classrooms as their male counterparts. Additionally, the subjects being taught will be reviewed, the new government said.

U.N. Deputy Secretary-General Amina Mohammed said that “by and large, we’re very concerned” about measures restricting girls’ access to education since the Taliban took control of the country following the U.S. withdrawal and collapse of the Afghan government in August.

“I think the international community here, first and foremost, has to draw on the expertise, on the leadership of Afghan women... to stop the reversal, to remain in school,” she said in the U.N. panel that focused on ways to support girls’ education in Afghanistan. The virtual discussion took place on the sidelines of the U.N. General Assembly, where the Taliban have requested to speak as representatives of Afghanistan.

Mohammed said aid to Afghanistan can “absolutely” be made conditional on education for girls and women. She said the United Nations and the international community can help ensure Afghanistan’s economy does not collapse and that educators and health care workers continue to be paid.

“This is where we have to really have resolve that recognition comes with your ability to be part of a global family that has a certain set of values and rights that must be adhered to,” she said. “Education is up front and center, especially for girls and for women.”

The executive director of UNICEF, Henrietta Fore, said such aid gives the United Nations some leverage in tackling both the “humanitarian emergency” and the emerging “human rights emergency” in Afghanistan. UNICEF is responsible for providing humanitarian and developmental aid to children.

The Taliban, while promising inclusivity and an open government, have excluded women from their all-male Cabinet and set up a ministry for the “ propagation of virtue and the prevention of vice ” in the building that once housed the Women’s Affairs Ministry. During the previous era of Taliban rule in the 1990s, before they were ousted by a U.S.-led coalition, girls and women were denied an education and were excluded from public life.

More than 100,000 people have fled Afghanistan in the wake of the Taliban takeover last month, including thousands of female activists, students and intellectuals.

The first revelation of the Quran that came to the Prophet Muhammad was ”iqra,” which means “read”, said Fawzia Koofi, first woman deputy speaker of parliament in Afghanistan. She spoke on the panel from Qatar.

“To the international community... my message would be to emphasize on girls’ return to school,” Koofi said. She asked participants to realize that an Afghanistan that is oppressing more than half its population cannot be a reliable partner in the world.

Activist Malala Yousafzai, who serves as a U.N. “messenger of peace,” said the world cannot make compromises on the protection of women’s rights. Yousafzai was shot in the head on her way home from school as a teenager in 2012 by a Taliban gunman in Pakistan’s Swat Valley for her campaigning for girls’ education.

Mohammed, the U.N. deputy secretary-general, noted the Prophet Muhammad’s wife, Khadija, was a successful businesswoman whom he supported in her business — an observation she said can be used by countries in the region to show that “you’re not outside of Islam, you’re not outside of the preachings of the Quran, when we promote the rights of women and girls.”

Afghan’s Taliban order women to cover up head to toe

India’s Modi targets neighbors at UN, but not by name