India’s Modi targets neighbors at UN, but not by name 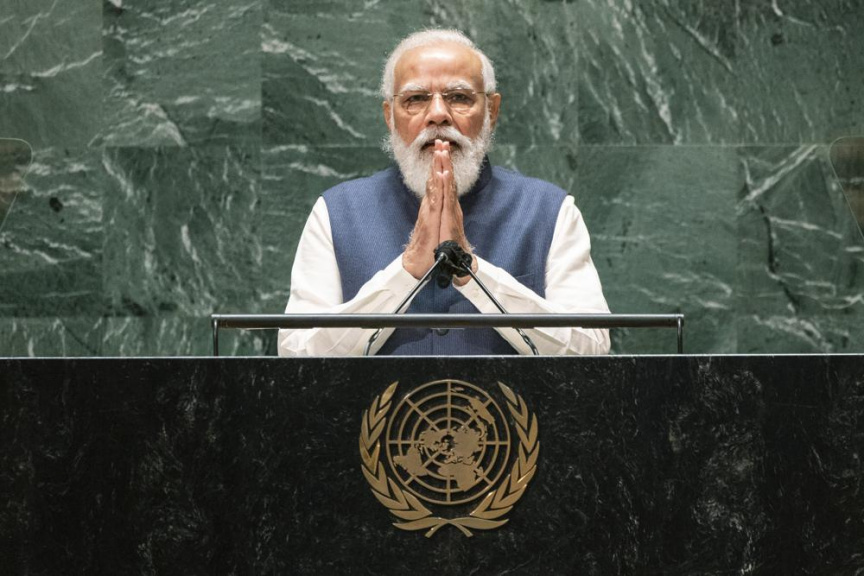 NEW YORK (AP) — Indian Prime Minister Narendra Modi didn’t directly mention Pakistan or China in his Saturday speech to the United Nations General Assembly, but the targets of his address were clear.

In a roughly 20-minute speech delivered in-person and in Hindi, he called upon the international community to help the women, children and minorities of Afghanistan and said that it was imperative the country not be used as a base from which to spread terror.

“We also need to be alert and ensure that no country tries to take advantage of the delicate situation there, and use it as a tool for its own selfish interests,” he said in an apparent reference to Pakistan, wedged between Afghanistan and India.

India has charged that the Taliban is Pakistan’s “proxy terrorist” group and expressed concerns that Afghanistan could be used as a training ground for anti-India militant groups. The government in New Delhi also worries that the Taliban takeover could strengthen insurgency in the disputed region of Kashmir, which both India and Pakistan claim in full.

Modi did not mention Kashmir or the long-simmering conflict there, in contrast to Pakistani Prime Minister Imran Khan’s speech the previous evening.

Modi also highlighted what he called the need to protect oceans from “the race for expansion and exclusion.” India and China have long competed for influence in the Indian Ocean.

Modi’s speech came a day after the prime minister met one-on-one with President Joe Biden and participated in a summit of “the Quad”: the U.S., Japan, India and Australia. The members of the informal Indo-Pacific alliance have been uneasy as China’s power grows in the region.

On the heels of waves of coronavirus surges that have ravaged India, Modi made no mention of his own country’s death toll — one that experts believe numbers in the millions. But he reaffirmed last week’s announcement that India would restart exporting vaccines next month.

India paused its export of vaccines in April after donating or selling 66 million doses to nearly 100 countries. The halt, amid an overwhelming virus surge, left many developing countries without adequate supply as India was expected to be a key supplier.

“Deeply conscious of its responsibility towards mankind, India has resumed the process of providing vaccines to those who need it in the world,” Modi said, inviting vaccine manufacturers to come to India and touting Indian scientists’ advances.

Modi’s elision of direct references to China, Pakistan or Indian coronavirus casualties isn’t exactly new. It was the same story at last year’s U.N. General Assembly, when amid border tensions with Pakistan and China and an already high death toll, he opted to instead paint India as a country that treats “the whole world as one family” and promoted domestic initiatives.

Modi also reiterated last year’s criticism of the United Nations, saying it was incumbent on the international body to strengthen its own effectiveness and boost its credibility.

“Today, all kinds of questions have been raised about the U.N.,” he said. “We have seen such questions being raised related to the climate crisis. And we also saw that during COVID, the proxy war going on in many parts of the world, terrorism, and the recent Afghan crisis have further highlighted the seriousness of these questions.”

India has long pushed for a permanent seat on the Security Council, the most powerful organ of the United Nations. Earlier in his speech, Modi referenced India’s global influence by underscoring that “every sixth person in the world is Indian.”

While Modi struck a high-minded tone in his speech, India and Pakistan verbally sparred during Friday night’s “right of reply” period. Following Khan’s speech in which he accused India of human rights abuses and fomenting terrorism, an Indian diplomat essentially flung those same accusations back.

“Our diversity is the identity of our strong democracy,” he said. “It is a country that has dozens of languages. Hundreds of dialects, different lifestyles and cuisines. This is the best example of a vibrant democracy.”

Less than an hour after Modi’s speech concluded, a coalition of groups outside the United Nations building protested what organizers described as “the Modi government’s assault on human rights, secular democracy, and persecution of religious minorities, Dalits, and farmers in India.”

Taliban hang body in public; signal return to past