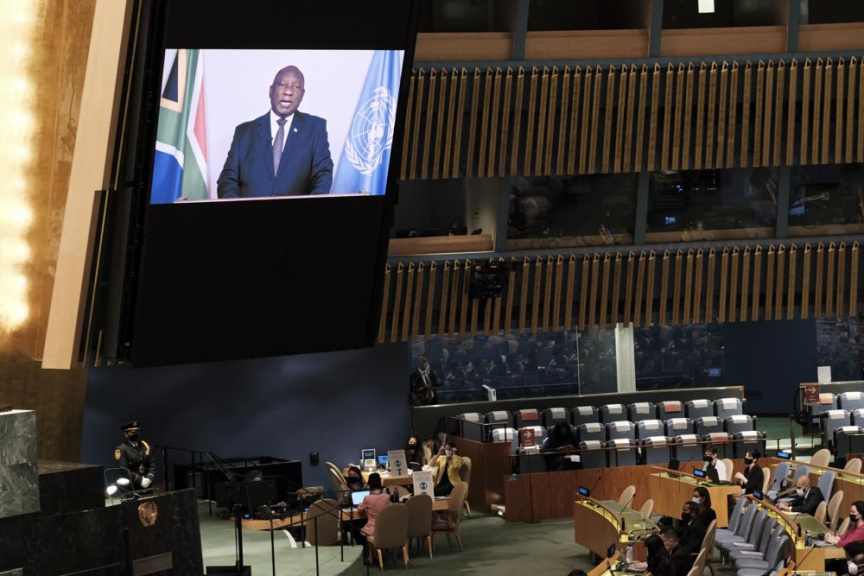 As wealthy countries begin to consider whether to offer their populations a third COVID-19 shot, African nations still waiting for their first gave this stark reminder to world leaders at the U.N. General Assembly on Thursday: “No one is safe unless we are all safe.”

That message was repeated throughout the day as the inequity of vaccine distribution came into sharp focus. As of mid-September, fewer than 4% of Africans have been fully immunized and most of the 5.7 billion vaccine doses administered around the world have been given in just 10 rich countries.

“The virus doesn’t know continents, borders, even less nationalities or social statuses,” Itno told the General Assembly. “The countries and regions that aren’t vaccinated will be a source of propagating and developing new variants of the virus. In this regard, we welcome the repeated appeals of the United Nations secretary general and the director general of the (World Health Organization) in favor of access to the vaccine for all. The salvation of humanity depends on it.”

The struggle to contain the coronavirus pandemic has featured prominently in leaders’ speeches over the past few days — many of them delivered remotely exactly because of the virus. Country after country acknowledged the wide disparity in accessing the vaccine, painting a picture so bleak that a solution has at times seemed impossibly out of reach.

South Africa’s president Cyril Ramaphosa pointed to vaccines as “the greatest defense that humanity has against the ravages of this pandemic.”

“It is therefore a great concern that the global community has not sustained the principles of solidarity and cooperation in securing equitable access to COVID-19 vaccines,” he said. “It is an indictment on humanity that more than 82% of the world’s vaccine doses have been acquired by wealthy countries, while less than 1% has gone to low-income countries.”

Earlier this year, U.S. President Joe Biden broke with European allies to embrace the waivers, but there has been no movement toward the necessary global consensus on the issue required under WTO rules.

While some nongovernmental organizations have called the waivers vital to boosting global production of the shots, U.S. officials concede it is not the most constricting factor in the inequitable vaccine distribution — and some privately doubt the waivers for the highly complex shots would lead to enhanced production.

Angola President João Lourenço said it was “shocking to see the disparity between some nations and others with respect to availability of vaccines.”

“These disparities allow for third doses to be given, in some cases, while, in other cases, as in Africa, the vast majority of the population has not even received the first dose,” Lourenço said.

The U.S., Britain, France, Germany and Israel are among the countries that have begun administering boosters or announced plans to do so.

Namibia President Hage Geingob called it “vaccine apartheid,” a notable reference given the country’s own experience with apartheid when neighboring South Africa’s white minority government controlled South West Africa, the name for Namibia before its independence in 1990.

“There is a virus far more terrible, far more harrowing than COVID19. It is the virus of inequality,” said the president of the Indian Ocean island nation of the Seychelles, Wavel Ramkalawan.

The grim consequences of COVID-19 hit Tanzania especially hard when the East African country’s then-president John Magufuli, who had insisted the coronavirus could be defeated with prayer, died in March. The presidency went to his deputy, Samia Suluhu Hassan, who has since changed Tanzania’s course on the pandemic but still sees great challenges ahead.

“We tend to forget that no one is safe until everyone is safe,” she said during her speech Thursday, stressing the importance of countries with surplus COVID-19 vaccine doses sharing them with other countries.

Benido Impouma, a program director with the WHO’s Africa program, noted during a weekly video news conference that the surge in new COVID-19 cases is starting to ease in Africa “but with 108,000 new cases, more than 3,000 lives lost in the past week and 16 countries still in resurgence, this fight is far from over.”

“Fresh increases in cases should be expected in the coming months,” Impouma said. “Without widespread vaccination and other public and social measures, the continent’s fourth wave is likely to be the worst, the most brutal yet.”

On Wednesday, during a global vaccination summit convened virtually on the sidelines of the General Assembly, Biden announced that the United States would double its purchase of Pfizer’s COVID-19 shots to share with the world to 1 billion doses, with the goal of vaccinating 70% of the global population within the next year.

Lack of access to vaccines is not just Africa’s concern. Leaders of developing nations in different regions echoed the frustration. President Luis Arce of Bolivia, one of Latin America’s poorest nations, told assembled diplomats that biopharmaceutical companies should make their patents available and share knowledge and technology for vaccine production.

“Access to the vaccine should be considered a human right. We cannot be indifferent, much less profit from health in pandemic times,” Arce said.

Earlier on Thursday, Cuba’s President Miguel Díaz-Canel stressed that “hundreds of millions of people in low-income nations still await their first dose, and can’t even guess whether they will ever receive it.”

The WHO says only 15% of promised donations of vaccines — from rich countries that have access to large quantities of them — have been delivered. The U.N. health agency has said it wants countries to fulfill their dose-sharing pledges “immediately” and make shots available for programs that benefit poor countries and Africa in particular.