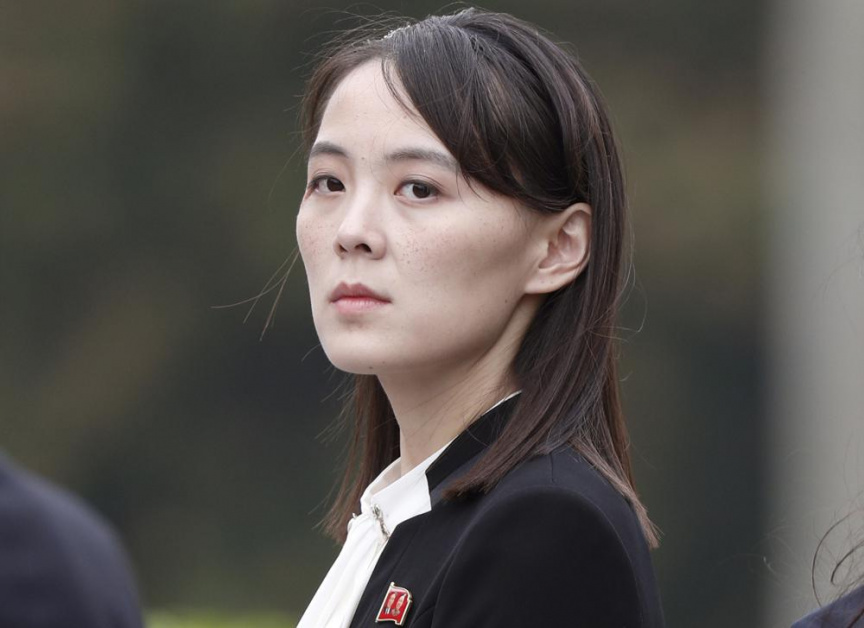 “If (South) Korea distances itself from the past when it provoked us and criticized us at every step with its double standards and restores sincerity in its words and actions and abandons its hostility, we would then be willing to resume close communication and engage in constructive discussions about restoring and developing relations,” Kim Yo Jong said.

To achieve the end-of-the war declaration, she said: “We must ensure mutual respect toward one another and abandon prejudiced views, harshly hostile policies and unfair double standards toward the other side first.”

Her comments were a contrast to a blunt statement by a senior North Korean diplomat earlier Friday that the end-of-war declaration could be used as a “smokescreen covering up the U.S. hostile policy” against the North.

Vice Foreign Minister Ri Thae Song American weapons and troops deployed in South Korea and its vicinity and regular U.S. military drills in the region “all point to the U.S. hostile policy toward (North Korea) getting vicious day by day.” North Korea has also long described U.S.-led economic sanctions as proof of U.S. hostility against the North.

In a response to Ri’s statement, South Korea’s Unification Ministry said it’ll continue its efforts to adopt the end-of-the war declaration and strengthen cooperation with related countries. Cha Duck Chul, a deputy ministry spokesman, said declaring the war’s end would be “a very meaningful step” as it could be a starting point for peace negotiations and denuclearization on the peninsula.

Both Koreas had called for an end-of-war declaration to be made and a peace treaty to be signed during the period of diplomacy with the United States that began in 2018, and there was speculation then-President Donald Trump might announce the war’s end in early 2019 to convince North Korean leader Kim Jong Un to commit to denuclearization.

No such announcement was made as the diplomacy faded to a stalemate over easing the sanctions in return for North Korea denuclearizing. In late 2019, North Korea said the nuclear crisis won’t be resolved if the United States sought to persuade it to return to the talks with a proposal on the war-end declaration without withdrawing its hostile policy.

In recent months, Kim has warned that North Korea would bolster its nuclear arsenal and introduce more sophisticated weapons systems unless the United States drops its hostile policy. Last week, North Korea conducted its first cruise and ballistic missile tests since March, demonstrating its ability to launch attacks on South Korea and Japan, two key U.S. allies where a total of 80,000 American soldiers are stationed.