President: What does the world stand to lose by recognizing Palestine as an independent state? 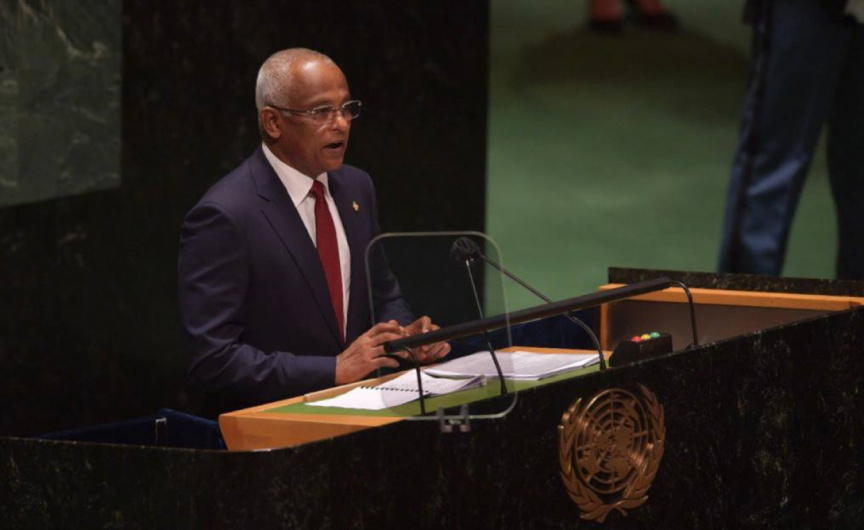 President Ibrahim Mohamed Solih has stated that the people of the Maldives stands in solidarity with the Palestinian people – posing the question to the rest of the world on what stand to lose by recognizing Palestine as an independent state.

President Solih delivered his general debate statement at the 76th Session of the United Nations General Assembly – during which he advocated for Palestine to be recognized as an independent state as well as the rights of Palestinians.

“As the Head of State of a small country, I am able to stand here and speak to you all today because my country is recognized as a State. What has the world got to lose by fully recognizing Palestine as an independent State?” he raised the question. On behalf of the Maldivian people, I want the privilege extended to millions of my Palestinian brothers and sisters - for them to be fully recognized by the United Nations and their individual liberties protected. I want to see a fully recognized Palestinian State with all the benefits and opportunities that membership confers,” he had said.

President Solih also expressed concern over the situation in Afghanistan – as a neighbor in the wider South Asia region on behalf of the people of Maldives. In this regard, he noted that for the long-term peace and stability of Afghanistan as well as to protect the rights of its people, the formation of an inclusive and representative government for the people is important.

He also stressed the need to ensure the safety of the people, the protection and realization of the rights of women and girls in Afghanistan.

In concluding his address – President Solih reaffirmed his faith in the United Nations, adding that the organization still offers the best hope for humanity.

“This organization still represents the pinnacle of what concerted diplomacy can achieve and continues to embody the hopes of all, irrespective of status, class or gender, who believe in peaceful dialogue to solve global problems. From famine to pandemics to terrorism, the United Nations is the most important global platform for deliberation and decision-making to solve the world’s most important challenges,” he had said.

President Solih had discussed an array of global issues such as climate change, the COVID-19 pandemic and terrorism during his general debate statement at the 76th Session of UNGA. He had delivered his remarks on the third speaking slot this year; early slots are rarely accorded to smaller states. Moreover, he had delivered his address in Dhivehi language.

Following the conclusion of President Solih’s address, the government of Palestine had extended gratitude towards him and the Maldives, for using the opportunity to address the situation at Palestine via a tweet.

#LIVE: The high-level General Debate starts today 21 Sept. at @UN. The President of the Republic of #Maldives @MVPMNY @foreignMV uses his platform to address the unjust and illegal #occupation of #Palestine. When will our time come for freedom? Thank you Maldives. #UNGA #UNGA76 pic.twitter.com/46WcI7owGG

The recently inaugurated 76th Session of UNGA is presided by the President Abdulla Shahid – the Maldivian Foreign Minister.