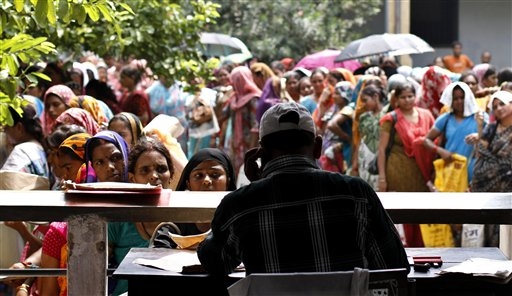 NEW DELHI (AP) — Vijay Kumar clutched a worn plastic folder containing his high school diploma and his nursing aide certificate as he joined a long queue at an employment exchange in a New Delhi suburb. It's a familiar ritual. For six years he has struck out.

Kumar is one of the millions of young Indians who make up a population bulge that experts say will see India hit 1.6 billion people in less than 20 years, overtaking China as the world's most populated country. Over the next three to four decades India will become remarkably young, with more than half its population under 25.

India's politicians like to boast that the swelling youth population is a powerful rising tide that will propel the country into a global economic power while other Asian nations such as Japan grapple with graying majorities. They can point to China where a population spurt contributed to rising prosperity as a vast army of young people migrated from the countryside to the manufacturing heartlands in its south and east. But in India it just might become a waste of human potential on a monumental scale, another missed opportunity in a country perennially failing to deliver on its promise.

The burgeoning youth population "will be a dividend if we empower our young," Kapil Sibal, minister for human resource development, said recently. "It will be a disaster if we fail."

Young job seekers such as Kumar flock to some 900 state-run job centers across the country, where they vie for a limited number of entry-level jobs offered by the government and private companies. The government says 6.6 percent of India's workers are jobless, a figure that belies that harsh reality of the labor market where many eke out a subsistence level existence in menial, unsafe and backbreaking jobs. The situation is worse for young job-seekers with government statistics placing the number of unemployed higher at 10.5 percent.

Kumar grew up in the poverty-ridden eastern state of Bihar. Like countless others he moved to the Indian capital in search of employment.

"In Bihar, there was no hope of getting a job. It was a choice of migrating to Delhi or starving. It wasn't a choice, really," he said, at once dispirited and hopeful that the latest visit to the employment exchange will yield results.

The employment agency in the New Delhi suburb of Shahdara operates from one corner of a large unswept hall in a government building. Broken furniture lies at one end. A tangle of electrical wires and cobwebs hang from the ceiling. The walls are covered in dust. A slow moving ceiling fan whirls the dust in slow eddies.

Job applicants sit on a row of metal benches, shifting sideways till it's their turn at the single desk where a clerk with a computer and printer registers them to apply for openings. The jobs on offer are at the very lowest rung as clerks or office boys — but as applicants say, it's a job.

Each day a couple of hundred applicants pass through the office. Fresh-faced young graduates registering for the first time. Older applicants, renewing their applications, are dejected and bitter at the futility of the exercise.

Rajinder Singh, the clerk, shrugs helplessly. "We post all the jobs there are. The problem is, there are too few openings and too many applicants," he said.

India's economy, the 10th largest in the world, is fast growing even considering its recent slowdown. Businesses want workers, the young especially.

But unlike in the economically struggling U.S. and Europe, where many highly skilled applicants are fighting over few jobs, only a minority of working-age Indians are qualified for skilled occupations.

The poor quality of education in India is partly to blame. Millions of job seekers have impressive sounding diplomas but many don't have the skills promised by those certificates from substandard colleges and technical institutes.

And as India's growth rate lags its potential, it's an ever bigger task for private companies to absorb the fast rising number of young job seekers. Despite low wages, foreign companies aren't rushing in to plug the gaps, wary of unpredictable turns in government policy, frequent strikes and other negatives.

Driven by their exposure to television and films showing the good life, young jobseekers have rising aspirations. Their inability to reach them is leading to enormous frustration.

Kumar gets hired by the day as a laborer with a house painting crew, sending part of his meager earnings back to his parents, itinerant farm workers.

Every six months he heads back to the exchange to renew his registration.

Seconds later, fatalism took over. "Whether I succeed or not, that is in God's hands."

There is concern that if growing numbers of young people in India do not find employment, or if they find themselves in dead-end jobs, the risk of political violence escalates, said Ashish Bose, a leading population expert.

India's economic and regional inequalities along with age-old caste, religious and class tensions provide ample cause for disgruntled young people to find a grievance to rally around, with the danger of them resorting to extremism.

India, with the world's largest chunk of illiterates at over 250 million, has to invest massively in technical and academic education, said Bose.

"Anyone who has some skill is potentially employable," he said.

Employment analysts say only 15 percent of working age Indians have the skills needed to find a good job — a deficit the government is trying to address through public-private partnerships focused on worker training. But with millions of young people entering the job market each year, the sheer numbers dwarf any government-sponsored program to impart skill training to first time job seekers.

Job hunter Dharmender Singh Rawat's lack of success has not tempered his hopes of a better life.

Rawat trained as a bus driver, but couldn't find a job. He tried to enlist in the armed forces, but failed. Clean shaven and neatly dressed, Rawat is clear that he wants to cast off his humble lower middle class roots and pursue his upwardly mobile dreams.

On occasion he drops by the employment exchange to renew his registration on the unemployment roster.

Without a job, Rawat spends much of the day watching television soaps and dreaming of a house in affluent south Delhi and a Scorpio SUV.

"When I dream, I am a different person," he said.