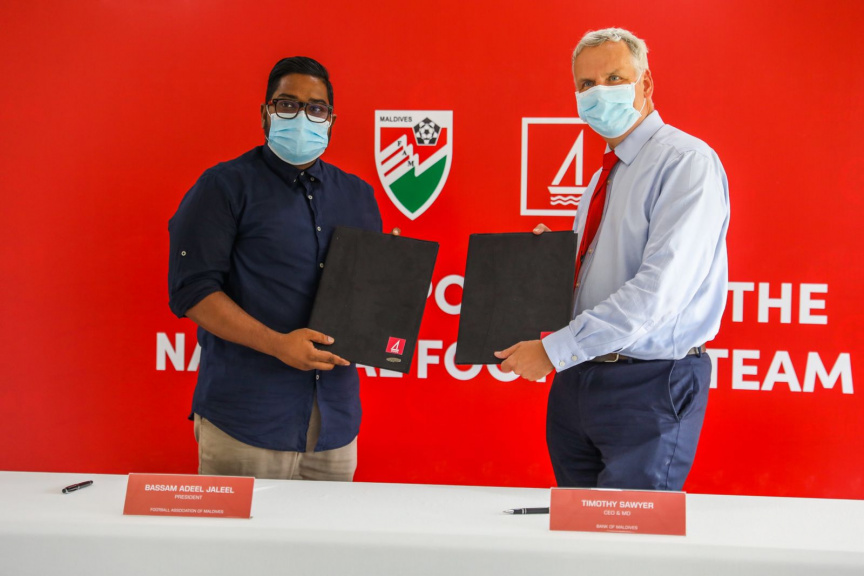 Bank of Maldives extends partnership with the Football Association of Maldives as the official sponsor for the national football teams on September 15, 2021. (Photo/BML)

The official sponsor of the national football teams – Bank of Maldives (BML) – has extended their partnership with the Football Association of Maldives (FAM), retaining their title.

The agreement pertaining to the matter was signed during a special ceremony held at the National Football Stadium earlier today. CEO, Managing Director Tim Sawyer signed the agreement on behalf of BML – whereas President Bassam Adeel Jaleel signed on behalf of FAM.

Subsequently – BML will remain as the exclusive sponsor of the national Senior Men’s, Senior Women’s, and Youth teams.

Both Tim and Bassam delivered addresses during the signing ceremony.

“We are delighted to renew our partnership at an exciting period in time for football in the Maldives. In addition to supporting the national teams’ achievements on the international stage, we remain committed to playing an important part in developing young football talent in the country. We wish the team all the best for the upcoming SAFF Championship,” Tim had said.

“We are proud and excited to partner with BML once again. Our players are our pride and the results we have obtained are the result of hard work, partnerships and support, not only on the field but also behind the scenes. I take this opportunity to thank Bank of Maldives for their continued support to our national teams and their enthusiasm to develop sports and our young players,” Bassam remarked.

Since 2017 – BML has been the exclusive sponsor of national football teams. BML is also the Official Banking Partner of SAFF Championship 2021.