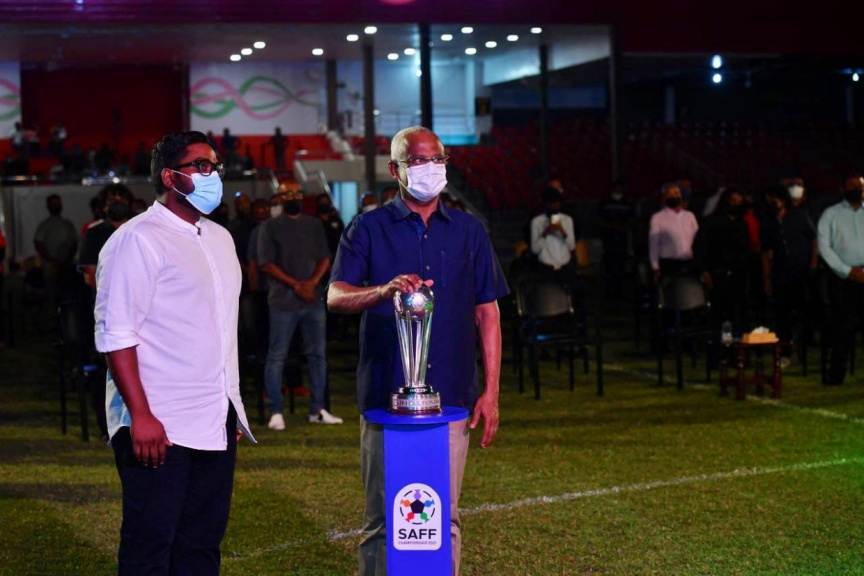 President Ibrahim Mohamed Solih has launched the SAFF Championship 2021 – the regional football tournament scheduled to begin in Maldives in October.

The launching event – held at the national football stadium on Sunday night – was attended by Cabinet ministers and other top state officials.

At the event, Maldives unveiled the logo, mascot - Snapper, and theme song for the tournament, along with a book chronicling Maldives’ journey to win the trophy in 2008 and 2018.

Speaking at the launching event, Football Association of Maldives (FAM)’s President Bassam Adeel Jaleel said he wants this year’s tournament to be held differently, under a different branding.

Bassam said that the tournament will also serve to boost Maldives’ exposure as a tourist destination.

An estimated 250 million people in the South East Asian region are expected to watch the tournament, he said.

The tournament will take place from October 1-16. Five countries will compete for the cup; Maldives, Nepal, Sri Lanka, India and Bangladesh.

Maldives enters this year’s tournament as defending champions, after having won the SAFF Championship 2018 in Dhaka by beating India 2-1.

National team to camp in Qatar before SAFF Championship